Update: Wanganui gangs will don their patches when they take to the streets today to protest the wearing of gang insignia.  Gang members say the demonstration they are holding at midday in Wanganui, will be peaceful. Black Power member, Denis O’Reilly, wants police to take their patches during today’s march so they will be charged and the courts will then rule on the validity of the new bylaw.

“If someone’s behaving like an egg or being threatening and the police arrest them, then that’s fair enough. But if it’s just a question of what you wear, rather than how you behave, then that seems to be against the Bill of Rights.”  Mr O’Reilly says not only is the law unfair, but the size of the area the ban applies to is excessive.

Acting area commander Greg Hudson says officers will be policing the law with commonsense, in line with other legislation such as a liquor ban.  “Any piece of legislation that enhances the public’s safety and wellbeing has got to be an advantage. This is a piece of legislation that the people of Wanganui have wanted.”  Mr Hudson does not believe gang members will move away from the area as a result of the ban, as most have family and work ties in the region.

Kia ora to NewsTalkZB for this story.

The Wanganui District Council banned gang patches from the city at its council meeting today. The bylaw, will come into force tomorrow and will give police powers to fine patchwearers $2000 and to take their gang insignia from them.

“This bylaw is intended to deal with… gangs, but will not affect clubs and groups who are law-abiding and non-confrontational generally,” a report on the gang bylaw submissions hearing, tabled at today’s meeting by senior councillor Randhir Dahya, said. 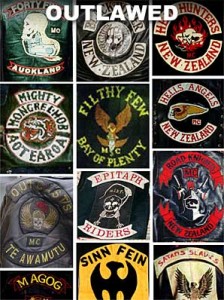 Police “totally supported” the passing of the bylaw, Mr Dahya’s report said.  “This bylaw demonstrates this council’s commitment to making Wanganui a safe place for all.”

The council was required to signpost where the bylaw would be enforced, and could not determine “all public places in the district are public places”.

What are your thoughts whānau?