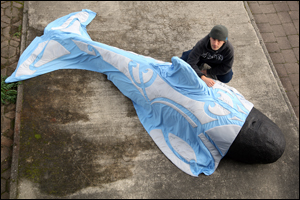 Rotorua’s Jamaine Fraser (Te Arawa) has designed a cloak that could help save stranded whales around the world.

The 23-year-old has just completed a degree in industrial design at Massey University. For his final year, he had to find a problem and come up with a design to solve it.

Mr Fraser has always been interested in whales. The problem he wanted to help solve was whale strandings.

“I basically got inspired when I went down Farewell Spit, it’s on the northern end of the South Island. I went there for a holiday one time and saw all these black and white photos of stranded long fin pilot whales.”

A Te Arawa descendant, Mr Fraser said he decided to get away from expensive conventional thinking of trying to lift the whale.

“Why not do something that’s pretty cheap, sustainable and can be reused?”

His design, a cloak that covers the whale and keeps it cool until it can be refloated. The cloak was a specially designed material that had crystals inside it which absorbs water, expands and had the cooling properties of water.

He has called his design Korowai o Tangaroa (the cloak of the sea).

“There is more than one perspective when it comes to whale strandings. [Ancestral] Maori like to see them as a gift. Others like to save them and put them out to sea,” said Mr Fraser.

He couldn’t design something that picked whales up and put them back or harvested the whale, because it would ignore one or the other’s perspective.

“So I thought why not design a cover that would keep them cool and it’s kind of letting nature decide whether or not they are going to live.”

Mr Fraser has won a trip to Bangkok in October to attend the Creative Catalyst Seminar for a chance to meet young entrepreneurs and designers.

Mr Fraser said there had been a lot of interest in his product, but he had no plans to turn it into a business.

Kia ora to Greg Taipari and the Rotorua Post for this great article!!

3 thoughts on “He Korowai o Tangaroa”