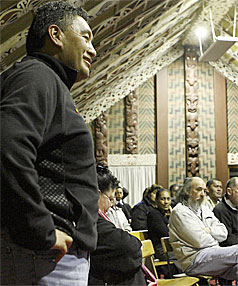 The Maori flag should fly alongside the New Zealand flag on all days of national significance, Maori say. The Government has been holding 21 hui nationwide to determine which Maori flag to fly on Waitangi Day.

Te Tai Tonga MP Rahui Katene said Maori were also talking about when the flag should fly, and the consensus was that it should not be restricted to Waitangi Day.  Katene was not at last night’s Christchurch hui but said the feeling at others she had attended was that the chosen flag should fly on all days of national significance.

“People are saying days of significance and other times as well. Some are saying that whenever or wherever the New Zealand flag is flying, the Maori flag should also be able to fly,” she said.

“If that’s what people want, we [the Maori Party] would certainly push for that.”