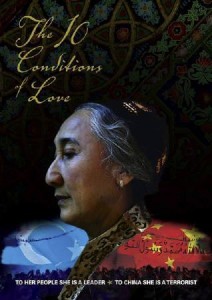 We wanted to tautoko MTS for their stance on the following:

The Chinese Embassy is trying to stop Maori Television from showing a documentary about a Muslim minority in China.  In Australia, Chinese authorities went to great lengths to stop The 10 Conditions of Love playing at the Melbourne Film Festival – but were unsuccessful.

The Chinese Government does not want Maori TV to screen the documentary, or an interview it has done with the main subject.  That is a stance that has shocked the interviewer.
“To think that the Chinese Government would try and tell Maori Television what to do seemed, quite surprising to me,” says Maori TV reporter Wena Harawira.
Click here for news coverage of  the controversy.

The documentary is about exiled Uyghur Nationalist Rebiya Kadeer, and the Uyghur people’s struggle for an independent state in China.   Ms Harawira travelled to Australia to interview the twice Nobel Peace Prize nominated Kadeer, who was there for the movie’s premiere.

They have accused her of helping to orchestrate last month’s ethnic violence in China’s Xinjiang province, in which 197 people were killed.  Officials from the Chinese Embassy met with Maori TV on Wednesday to try and discourage them from showing anything that features Kadeer.

No one from the embassy would talk to 3 News today, but they released a statement which reads:

Kia ora to 3 News for this story. 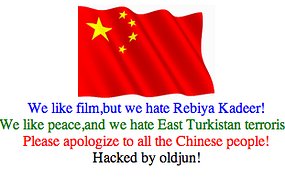 There was even a cyber attack on the Melbourne International Film Festival website in July of this year.  Instead of the usual website, visitors were greeted by a white page with an animated waving chinese flag and multi-coloured text:

We like film,but we hate Rebiya Kadeer!
We like peace,and we hate East Turkistan terrorist!
Please apologize to all the Chinese people!
Hacked by oldjun!