SAVE OUR NIGHT CLASSES

The government cut funding for night classes and by 2010 this 100 year tradition will be gone!

Join our fight to reverse this decision. 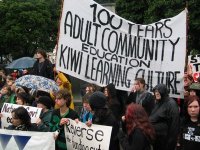 Have you ever been to a night class at your local school?  Language, Computing, Drivers Ed, Woodwork, Cooking or Sewing?

Night classes have been a part of our communities for over 100 years. The government will cut all funding next year and is only allowing English and Maths classes to be available.

The Minister – Anne Tolley for Education blames the recession and the previous government. She has described the classes as hobby classes and unimportant. She says that if people want to do these classes they should pay for it themselves. But in times of a recession – who these days can afford to pay three times as much?

The National government has no answer to those that cannot afford to pay more.

Cutting night classes is a stupid and short sighted decision.

In the May Budget, the National Government announced an 80% cut in the funding provided to schools throughout New Zealand to run night classes or Adult Community Education.
“In 2010 all school ACE funding will be replaced with a new approach that reinvests approximately 20% of current school-based ACE funding to re-focussed priority areas, such as literacy and numeracy.  It is likely that there will be only a small number of schools receiving ACE funding for 2010 and beyond’. (Budget 2009 Fact Sheet TEC Website)
In essence, this decision will spell the end to over 100 years of night classes in New Zealand.
Why are we protesting against these cuts?
The Government itself acknowledges the value of ACE but claims that, in tough times, “lower-value” courses need to be cut.
We believe the opposite.  In times of recession, more investment should be made in education.  People are looking for affordable ways to upskill and schools are in fact noticing an increase in enrolments as learners spend their discretionary income on things that are useful in the long-term, like education and personal development.
The current level of funding for night classes is $16 million per year – less than 0.6% of the total tertiary budget.  A report prepared by PriceWaterhouseCoopers in 2007 concluded that the estimated economic gain of ACE is $4.8 billion to $6.3 billion – value for money in anyone’s language.
Lack of Consultation
The ACE sector feels blind-sided by Government.  Had we been asked, we would have been prepared to look at ways of making savings.  There was absolutely no consultation or communication about the cuts – the announcement on Budget Night stunned the sector.
Loss to Community Groups
All schools receiving ACE funding are required to give around 10% of their funding to local community groups to run courses, so these groups nationally will now have to find $1.6 million to support their educational activities.
Groups like Citizens Advice Bureaux, Parent Help groups, Youthline, Women’s Refuges, Budgeting Services and hundreds more will now have to seek funding for other providers, whose resources are also being stretched.
“These are just hobby courses – why should the taxpayers subsidise these?”
“National supports these low-cost courses that meet a range of community aspirations and needs.  The current system of night classes through schools works well and should not be tampered with”.
(The Hon Bill English in a press release on 30 January 2006).
Over 220,000 New Zealanders attend night classes around NZ each year for a wide variety of reasons.  Some come to upskill in computing and business studies to get jobs, others to learn essential life skills such as budgeting, defensive driving and First Aid.  Many ACE programmes offer affordable ESOL courses for new migrants and refugees – courses that are not available or affordable elsewhere.  Many other students come to meet new people, gain new skills and end social isolation – potentially saving costs for other Government agencies like Health and Social Development.
“Adult and community education is tertiary education that engages adults in a range of educational activities in a non-formal learning environment.  Whilst most ACE provision does not lead to a formal qualification, it promotes inclusiveness, develops confidence and self-esteem and facilitates learning pathways into further education.  ACE provision meets the learning needs of its community and helps to strengthen social cohesion”. (ACE Assurance Statement and Self-Audit Checklist Sept 2008 – TEC Publication)
The benefits of ACE are clearly recognised by Government – the country cannot afford NOT to support it in all its forms.
If these programmes have to become self-supporting (user-pays), fees are likely to double or triple in most schools – only the wealthy will be able to have access to the benefits of the courses.  Many schools, particularly in smaller towns and country areas, have already signalled that this is not an option – they will have to close their programmes, leaving their communities with few, if any, adult learning opportunities.
Redundancies
With so many schools likely to withdraw provision, it is estimated that over 200 coordinators and support staff and several thousand tutors will be out of work.
Benefits to the Community-at-large
The high level of participation in school-based community education is a result of a strong national existing infrastructure of people, resources and buildings.  Every community has a local secondary school which enables ACE to be accessible and affordable for everyone in all communities.  Schools have an infrastructure that encourages community participation – people look to their local school for learning opportunities. Of equal importance are the millions of dollars worth of assets a school has, that are available for community use outside regular school hours.
Call to Action!
We urge Government to reconsider its short-sighted decision to cut funding to the ACE sector.  The recession will end and the economy will improve but night classes, a Kiwi tradition for over 100 years will never come back if they are lost to us now.

1 thought on “SUPPORT THE CAMPAIGN TO SAVE NIGHT CLASSES”