Porirua will play host to MAORI ART MARKet when it showcases the work of more than 160 leading and emerging contemporary Māori artists. Exhibited work will range from painting, carving, photography and weaving through to silver jewelery, clay, mixed media and Ta Moko. An estimated $1 million of artwork is predicted to change hands at the event or soon after.

Pataka Museum and the newly opened Te Rauparaha Events Centre will be the venues for MAORI ART MARKet on October 9, 10, 11. The weekend festival driven by Toi Maori Aotearoa alongside Pataka Museum has become an international showcase for established and emerging artists, many of who will be present demonstrating their work. 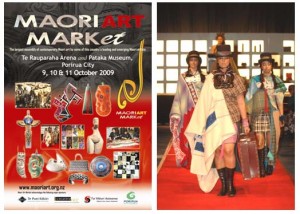 As a biennial event, MAORI ART MARKet has continued to go from strength to strength since it was launched as Māori Art Meets America in San Francisco 2005 and again at the Wellington Events Centre in 2007. Toi Māori Aotearoa have been instrumental in building the international profile of Māori art with other events including the successful exhibition Small Māori Treasures at the de Young Museum in San Francisco in October 2008, and at the Blacktown Art Gallery in Sydney earlier this year.

Creative Director for the event, Darcy Nicholas, said the contemporary Māori art movement was being watched with great interest throughout Asia, the Pacific Rim and Europe.

Many of these artists are already exhibiting and have been selling their work on the international stage for several years.   A number of them are not well known in New Zealand, yet have work in major private collections overseas where the art market is much bigger, more dynamic and competitive”.

The New Zealand concept is based on the highly successful INDIAN MARKET, which evolved over 80 years ago and is held in Santa Fe every August. As part of this concept, other indigenous artists are invited to attend. This year Patricia Michaels, the renowned Native American Fashion designer, Dan Namingha the Hopi Indian contemporary painter, Richard Zane Smith Master Ceramicist of the Wyandot Nation, and Dempsey Bob the Tahltan Tlingit sculptor will be attending MAORI ART MARKet. Invited Pacific artists include Lorene Taurerewa, Michel Tuffery, and writer and painter Albert Wendt.

Toi Māori Aotearoa is the national organisation for Māori art and artists and receives major funding from Te Waka Toi, the Māori Arts Board of Creative New Zealand.