By CHERIE HOWIE – The Marlborough Express

Forty-four years ago activist LaDonna Harris had not long established Oklahomans for Indian Opportunity to improve the economic position of Native Americans in her home state. 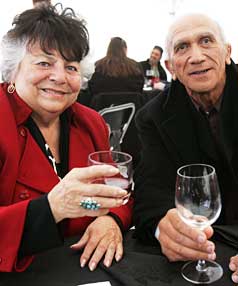 By 1970 she was thinking even bigger, setting up the national equivalent – Americans for Indian Opportunity (AIO), an organisation she still leads today.

Since then, hundreds of young Native American leaders have graduated from the organisation’s Ambassadors programme.

The idea started by Ms Harris has spread to indigenous people around the world, including New Zealand, where The Advancement of Maori Opportunity was established after an AIO visit seven years ago. Strong links between the groups have been developed and last night those were further strengthened when 50 AIO members, including Ms Harris, were hosted at the Awatere Valley vineyard of Maori-owned wine exporters Tohu Wines.

Tohu Wines is among several successful Maori initiatives the group are being shown in New Zealand, something Ms Harris, 78, sees as a great way to open group members’ minds to new opportunities.

“We want them to have a global view. That’s something that doesn’t necessarily happen, in our tribes and in the United States generally. We don’t really learn about other countries … we want them to see the bigger picture.”

The bigger picture is certainly something Ms Harris has seen during half a century of advocacy for not only Native Americans, but women, African Americans, the mentally ill and children.

Born in the stricken Oklahoma dust bowl in 1931, she was raised by her grandparents after her parents left to find work.

It was from her grandparents that she learned traditions and values of the Comanche – a nomadic prairie tribe and the last to be brought into the “reservation situation”, Ms Harris said.

She spoke only her tribal language until she started school.

Later, she married her high school sweetheart, Fred Harris, who would go on to become a United States senator for Oklahoma from 1964 to 1973.

It was around this time her activism moved to the national stage, not only with the establishment of AIO, but also founding the National Indian Housing Council, the Council of Energy Resource Tribes and the National Tribal Environmental Council.

“It kind of starts escalating, once you start doing things … if you are a `doer’ people always ask you to help.”

That help has not been limited to Native American projects.

US president Jimmy Carter appointed her to the United Nation’s Education, Scientific and Cultural Organisation near the end of his presidency, and she has also served on several presidential commissions.

She is pragmatic about the development of businesses such as casinos, which she said have been “the best thing that has happened” for about 90 per cent of the tribes involved.

“We’d tried all kinds of economic development, the Government even moved [Native American] families to the cities. Nothing was working.”

Profits from tribal casino businesses have gone towards education scholarships, caring for the elderly and the development of medical and other infrastructure for the tribes involved.

The AIO was about helping tribes make use of their own resources to find economic prosperity.

“In the 1960s we were a group of people who were looking after our culture.

“Now, in the 2000s, we have all of these young people who bring their skills and education, but some maybe don’t know that much about their culture,” she said.

AIO was about bringing the two together, she said.