The British government is facing a lawsuit over the repression of the Kenyan struggle for independence against colonial rule. On Tuesday, a group 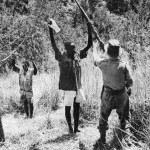 of veterans of Kenyas resistance movement filed a suit in British court seeking compensation for human rights abuses during the Mau Mau rebellion of 1952 to 1960. More than 100,000 Kenyans are believed to have been killed in the British crackdown. Gitu Wa Kahengeri is a Mau Mau veteran and spokesperson for the case. Gitu Wa Kahengeri: The colonial regime in Kenya at that time had robbed all our lands, had broken almost every human right against us, and we were living at that time in our country like slaves, and therefore we rose up and say we must see that Kenya recovers its freedom and its land.

The British government has so far refused to recognize compensation claims.