Audacious is the right word,” says Jim Mather, seated in his corner office in the Newmarket headquarters of the Maori Television Service. 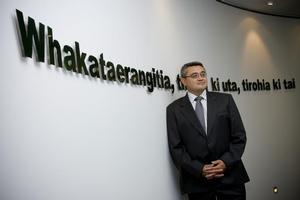 Maori TV’s chief executive is explaining how the television company came to gain and, it appears, ultimately lose, the inside running for exclusive free-to-air rights for what is likely to be the biggest sports tournament New Zealand is likely to host.

For all the praise Maori Television has earned for delivering quality programmes on tight budgets, it exists on public money.

For it to have a go – and get as far as it did – in out-manoeuvring mainstream broadcasters Television New Zealand and TV3 was a surprise to many.

It shows it doesn’t place limits on its ambition and is serious in its intent to build and broaden its viewer base.

And it is up for the fight. When the Government pledged money for TVNZ to challenge Maori Television as the International Rugby Board’s (IRB) preferred bidder, Maori Television countered that it had the backing of wealthy iwi and could raise the stakes.

The prospect of a bidding war with public money in each camp prompted the Government to broker the compromise deal of shared coverage (Maori Television, TVNZ, TV3) now before the IRB.

A colleague who covers Maori affairs says this is the first time that Mather, whom she describes as “a nice man”, has shown his steel so publicly.

In person he is sunny-faced, affable, a family man (father of two teenage sons and about to celebrate 20 years of marriage to Susan).

But he is a former soldier, resolute in pursuit of what he and Maori TV’s board see as its best interests.

He likes catchphrases. He didn’t come out with the British SAS motto, “Who dares wins”, but it was clear from our 90-minute interview that Maori TV is not content to tread water.

It wanted to be, Mather told a business gathering in July, “a kick-ass Maori television service” as well as “a world-class indigenous television broadcaster”.

That required staff with a sense of mission, he told the audience.

“There are few things more powerful than a large group of people with a single-minded focus … who are determined to win against the odds and prove everyone wrong.”

Mather, of Te Awa (Bay of Plenty) descent, beat the odds of coming from a family with no history of higher schooling.

With a bachelor of business studies and an MBA from Henley College in Britain, he worked as a financial controller for technology company Sulzer, where he was exposed to the Swiss executives’ intense focus on getting things right.

The drive to educate himself came from within, he says, and from influences in the army, where he was awarded the Sword of Honour for his achievements in officer training.

It became clear that self-improvement through continuing education was the way forward. (Mather continues to study part-time for a PhD in Maori economic development).

He’s in his fifth year at the helm of the broadcaster. He is not, he says, an itinerant chief executive. His reasons for wanting the job were personal as well as career-orientated.

“It was an opportunity to reconnect personally with my Maori culture,” he says. The challenge appealed too. “We had to get this right.”

Built on a history of legal challenges on Crown obligations to support Maori language through broadcasting, Maori TV had a traumatic beginning, the biggest scandal being the jailing for fraud of its first CEO, John Davies, for faking his qualifications.

Painful experience meant the board was by then willing to consider someone who didn’t have a broadcasting background, wasn’t a recognised Maori leader or seen as having strong Maori language skills, if the person had proven business and management acumen.

Mather is on record saying that he believes that business is colour-blind, and that if you are good enough you will succeed.

The principle may apply too in Maori TV’s recruiting. A third of the staff are not Maori. But, they do, says Mather, share a belief that the broadcaster contributes significantly to building a sense of nationhood.

“There’s a strong spirit here and I think we are very clear about what we stand for. We have a mantra – ‘keep it simple and keep it real’. We don’t confuse ourselves with complex strategies.”

Some people including Paul Norris, head of the Broadcasting School at Christchurch Polytechnic, think Maori TV overreached itself in trying to secure exclusive rights to the Rugby World Cup. But Mather argues that though bold, it was in line with keeping it simple and real.

It, and the Government as its stakeholder (through the Maori Affairs and Finance ministries), want more people of all hues to appreciate the indigenous culture as a taonga and to have more of a link than simply watching the All Black haka and humming along as the national anthem is sung in te reo. The more viewers it attracts, the better Maori TV can help with that.

Fifty-five per cent of viewers don’t subscribe to Sky Television, host broadcaster of the Cup. What better opportunity to encourage people to look at Maori TV than exclusive free-to-air rights?

The idea to bid for the exclusive free-to-air rights wasn’t born within Maori TV, Mather explains. Rather, IMG – hired by the IRB to find it the best deal – approached it after bids from TVNZ and TV3 failed to meet the IRB’s expectations.

“Their bids had either been discontinued or were parked. It was clear there was little if any activity from them.”

Maori TV got an indication that bids higher than $3 million would be taken seriously. Sky, which had by then secured pay TV rights would provide the pictures for 16 key games live and 32 delayed. It was an opportunity that had to be looked at.

Mather says the board wasn’t shocked when the proposal was first put to it in June. Management had a track record of putting “big, significant proposals” before it and the board has come to expect it. “The first reaction was ‘wow, this is big’,” says Mather.

Next came the questions. Risks identified were financial, reputational and capacity-related. The board asked for a more detailed plan, focusing on affordability, including possible business partners, and demonstrating that Maori TV had the technical expertise and resources to make it a success.

That Maori TV worked hand-in-glove with TPK and the Minister of Maori Affairs [Pita Sharples], is a misconception, to Mather’s mind.

“There was no smart deal [among Maori]. As an indigenous broadcaster we saw a real opportunity with the Rugby World Cup. When we were developing our business case we saw an organisation [Te Puni Kokiri, the Ministry for Maori Development] that was prepared to commit heavily to this and so we talked to them.”

The Herald understands that Maori TV’s bid was $5 million, of which TPK agreed to contribute $3 million.

“In hindsight, if we could have done this deal with Hyundai, or some other corporate, we would have worked strongly that way but Te Puni Kokiri did line up very well with some of our objectives.”

TPK wanted to maximise leverage for Maori from the Cup by promoting Maori businesses such as tourism operators, and cultural and heritage organisations as well as Maori broadcasting.

Maori TV could help by running promotional programmes in the time that it doesn’t currently broadcast (midnight to 3pm).

He acknowledges that Maori Party leader Sharples has a natural affinity with Maori TV but claims there is professional independence.

“The only political management that has occurred in my time at Maori Television has been this issue around the Rugby World Cup and I think it is fair to say that hasn’t come from the Maori Party, in terms of what has occurred.”

“We submitted the bid on September 4 and it looked like we were in a strong position. The IRB indicated we had submitted a serious and very credible bid and the industry intelligence was telling us that the other broadcasters would be unable to match such a bid.

“There was even engagement about how those other broadcasters [TVNZ and TV3] could possibly piggyback on our bid. Our response was that the tender specifications didn’t allow us to sub-licence. Exclusivity was the real commercial underlying value and we had a significant stakeholder in Te Puni Kokiri and were reluctant to dilute their investment in our bid.”

Mather says he was soon after summoned to a meeting in Wellington with English, Sports Minister Murray McCully and Broadcasting Minister Jonathan Coleman, on the basis of clarifying issues around Maori TV’s ability to deliver, its signal coverage and whether the Government’s contribution through TPK would be value for money.

The issues though were much deeper. “That was when it first became apparent that … the prospect of Maori Television being the successful bidder was untenable in some quarters.”

Faced with expected losses from the tournament of $39.3 million – to be picked up by the taxpayer – and the risk of that rising if ticket sales flop, the Government needs to ensure the widest possible television promotion, and TVNZ and TV3 were better prospects to do that.

Assuming the IRB accepts the Government-brokered compromise, Maori TV will share all games from the quarter-finals on with TVNZ and TV3, and share the opening with TVNZ. It has to itself two All Black pool games against weak opposition, and seven other pool games.

Mather claims Maori TV is satisfied. It has the first month of the competition to impress and reposition itself in the minds of New Zealanders who might think it is only for Maori viewers and who are unaware of the breadth of programming, that 40 per cent of all programming is in English and that during primetime, programmes have to be understandable to all.

“This is how we feel,” he says, slipping into a boxing analogy. “We haven’t got the devastating second-round knockout, a la David Tua, that we could have had. We have got a split points decision after 12 torrid rounds, where we have had to get up off the canvas on a couple of occasions and had been tempted to throw the towel in but have fought on until the end.”

He believes they have come away with a moral victory and have picked up fans.

“Not just the audacity of our bid, but as an indigenous television station that has made a real statement about our arrival and that we are ready and prepared to step up and engage with a much wider cross section of New Zealand.”

“It does incredibly well on very small budgets. It’s been very clever in the way it has acquired programming from overseas, the way it schedules programmes and in the particular programmes that it develops and which are made here, often by Maori producers and Maori television production companies. It is a good time to look at how far Maori TV has come and how far it might go.

“It has some very fine programmes,” says Norris. “It’s worth a look.”

Maori Television, a statutory corporation, gets the lion’s share of its annual budget from the public purse. Here is a breakdown of its funding:

From advertising and sponsorship.