The exhibit, “Whales | Tohora,” which comes from the Museum of New Zealand Te Papa Tongarewa is now touring internationally. The exhibt offers a comprehensive look at these creatures that have inspired awe and fear and have been at the center of such works as “Moby Dick” and the Old Testament.

It will be at the Carnegie Museum of Natural History in Pittsburg, USA, through May 2. 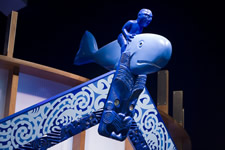 “Whales | Tohora” is the word for whales coined by Maori, the indigenous people of New Zealand. The exhibit features a model whale head that was used in the 2002 movie “Whale Rider,” which was set in a contemporary Maori community. It also examines the whaling industry that was built in New Zealand in the 19th and 20th centuries, and how attitudes gradually shifted away from hunting and toward conservation and protection. 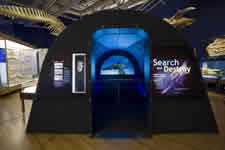 A staff reporter from the Observer writes “as the exhibit emphasizes, however, whaling wasn’t just a sport for its practitioners. One whale rolling ashore for a South Seas tribe was like getting a Wal-Mart dropped on their doorstep, since whale bone and teeth could be used for jewelry and weapons, whale meat was a source of protein that couldn’t otherwise be had and whale oil could be used in candle wax and lamps. Parts of the whale were later used for cosmetics and pet food”

Interesting that in the piece above the writer compares this taonga to Wal-Mart… in other words the Warehouse. Clearly the importance of tohara can be easily lost on others.

Whales also have been endangered because of pollution in the seas. A plastic bag removed from the stomach of one whale is in a glass jar in “Whales | Tohora.” Swallowing the bag is believed to have caused the whale’s death. 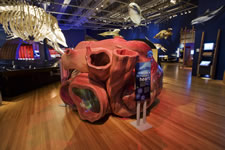 Even though there are many photos of the creatures in “Whales | Tohora,” the overwhelming physical dimensions of a whale are illustrated by a 58-foot skeleton of one that dominates the exhibit. Next to it is a reproduction of a blue whale’s heart (which if you have been to Te Papa with the tamariki you may have already seen), which is so large children can crawl through its arteries and ventricles.

Fossilized remains in “Whales | Tohora” show the ay whales are believed to have evolved over millions of years. Their earliest ancestors date back to hoofed land animals that looked like dogs and lived about 50 million years ago. Through many centuries of aquatic adaptation, they lost their legs and settled entirely in the sea.

In conjunction with “Whales | Tohora” the natural history museum is exhibiting some of the Maori artifacts it has in its collection. Some date back to at least 1904, according to David Watters, an anthropologist at the museum, and it’s not known how they made their way to Pittsburgh. No additional Maori material has been donated since the 1960s.

So whanau if you are in the area please go and give our Taonga tuku Iho some much needed waiata, karakia and aroha…

The Carnegie Museum of Natural History is the third stop on the North American tour of “Whales | Tohora.” It follows the National Geographic Museum in Washington, D.C. and the Exploration Place in Wichita, Kan.