Taika Waititi’s feature film BOY premiered to a sell out house on Friday night at the opening weekend of the Sundance Film Festival in Park City, Utah. The Festival is widely regarded as the premiere US showcase for American and international independent film. 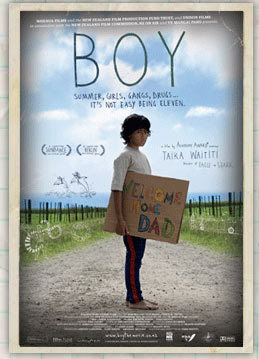 BOY is screening in competition in the Festival’s World Cinema Dramatic Section. Writer, director and actor Taika Waititi introduced his film to the audience. Also attending was the film’s young leading actor James Rolleston and producers Ainsley Gardiner, Cliff Curtis and Emanuel Michael. Rolleston received a standing ovation when he joined Waititi on the stage for the Q & A session at the end of the screening.

Early reviews from US media said the film “marked a new step up in maturity for the New Zealand director” and “Boy succeeds as both an ode to childhood and a lament about growing up.” (Eric Kohn, Indiewire). Vanity Fair’s Julian Sancton compared Boy to last year’s Sundance favorite Precious, adding that Waititi lifts this film even further through his

Inspired by Waititi’s Oscar nominated short Two Cars, One Night, BOY is a heartfelt coming-of-age tale about heroes, magic and Michael Jackson. Written and directed by Waititi, the film was shot in his childhood home town of Waihau Bay on the East Coast of New Zealand.

BOY is the debut feature for James Rolleston as 11 year old Boy. Waititi plays their father Alamein, who is the subject of Boy’s fantasies and whom he imagines as a deep sea diver, war hero, rugby legend and close relative of Michael Jackson. In reality Alamein is an inept, wannabe gangster who has been in jail for robbery.

The film will screen five more times at the festival which ends on Sunday 31st of January. Four of these screenings have sold out. The film will then screen in competition at the Berlin International Film Festival in February.

BOY will be released in NZ through Transmission Films on March 25th 2010.

Boy’s official website has also been launched where you can check out bios, video, images and a synopsis of the film.

11 thoughts on “BOY, opens to sold out shows at Sundance”