The thrilling New Zealand mystery drama Kaitangata Twitch has been selected as a finalist in the world’s most prestigious competition for children’s television – the Prix Jeunesse – competing in the fiction category for 7-11 year olds.

The awards, held in Munich, Germany, will announce the winners on 3rd June 2010 (NZ time).

We think this is the first New Zealand production ever to make the finals of the Prix Jeunesse, so it is incredibly exciting for us all,” says Director and Co-Executive Producer Yvonne Mackay of Production Shed.TV. 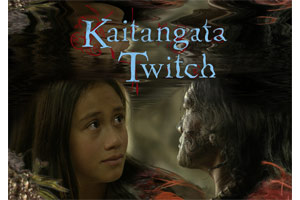 “Kaitangata Twitch deals with a number of strong themes over 13 x half hours: Conservation of the environment; the breakdown of family and most importantly, of young people finding their identity and their place within the world and their own mixed race family. These really reflect the qualities of the Prix Jeunesse – a celebration of diversity and of youth being special, but different.”

WorldFest-Houston has already picked Kaitangata Twitch as a winner: Mackay will find out on April 18th if the series has won the bronze, silver, gold or platinum award at the US Festival.

Commissioned by Maori Television, Kaitangata Twitch will screen in New Zealand from Sunday May 2nd at 7.00pm. The Production Shed.TV series is distributed internationally by Canadian-based Lenz Entertainment and will also air in Canada, Sweden and on ABC TV in Australia.

A tale of the modern world confronted by Maori legend, Kaitangata Twitch is packed with drama, live-action, CGI, myth and magic, from the fertile imagination of internationally beloved author Margaret Mahy, who recently received the world’s most prestigious prize for children’s literature: the Hans Christian Andersen Award, given for a whole body of work.

She also won the Major Picture Book Prize at this year’s Boston Globe Horn book awards, while over two hundred of her stories have been translated into 15 different languages. This story is Mahy’s first cross-cultural tale, and a very personal one, dealing with land dear to her heart and her family roots – her European New Zealand background and her 21st century part-Maori nephews and nieces.

In addition to Anna Paquin and Keisha Castle-Hughes, 13 year old Te Waimarie Kessell proves to be another great Kiwi acting discovery in the lead role of Meredith, a girl who feels a strange connection to the ghost of a young girl and the island of Kaitangata [Kai=food; Tangata=People].

Kessell (the niece of actress Simone) stars alongside acclaimed stage and screen actor George Henare (Once Warriors) as the mysterious old man, Lee Kaa and Charles Mesure (Bones, Without a Trace, Crossing Jordan) as Meredith’s Greenie father, Carey. They are supported by some high quality local talent, both exciting newcomers and established screen stars.

Kaitangata Twitch is directed by Yvonne Mackay, episodic director of some of New Zealand’s most popular drama including Duggan; The Insiders Guide to Happiness and the family feature The Silent One.

The series also features an island that eats people! Bringing the island to life has been in the hands of CGI wizard Ken Gorrie of Ian Taylor’s Animation Research Ltd (ARL).

Adapted for television by top New Zealand writers Gavin Strawhan; Michael Bennett and Laureate 2000 Briar Grace-Smith, the series was shot in High Definition on location in Mahy’s territory – Governor’s Bay outside Christchurch, New Zealand. David Paul is Director of Photography and Paul Sutorius Editor. Both won respective awards for their work on the telefeature Until Proven Innocent at the Qantas TV Awards in September 09.