Outstanding Maori secondary school students are the focus of new research into what factors influence their success.

University of Auckland Faculty of Education lecturer Melinda Webber is one of four researchers, all of Te Arawa descent, who have gone back into their Rotorua community to profile Maori students who are doing well in school.

There is not a great deal of documented research about teachers’ and children’s attitudes, knowledge and values regarding Maori students who show exceptional qualities at secondary school in New Zealand,” Ms Webber says. 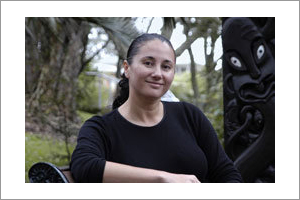 The ‘Te Ara a Ihenga’ project is inspired by the great Te Arawa tupuna Ihenga. Ms Webber says the project is about ensuring the greatness of whakapapa such as Ihenga continues in the Te Arawa people.

It involves researchers from Auckland, Canterbury and Victoria universities, and is supported by the Ngati Whakaue Education Endowment Trust Board. A pilot study has already been completed with a small cohort of students.

The researchers plan, provisionally, to launch a much larger study later this year involving all eight secondary schools and wharekura (Maori medium secondary schools) in the wider community.

Five common themes were identified in the pilot study as influential to Maori students succeeding at school:

Ms Webber stressed that the pilot project was too small to draw explicit conclusions, but it has set the direction for the larger scale study, which will offer a greater bank of data from which to draw more tangible recommendations to distribute to educators and parents.

We want to use this knowledge to help schools and parents understand what an amazing job they are doing. I think too often Maori only hear about the negatives, but a lot of what they are doing is right and is helping our people to succeed,” Ms Webber says.

The pilot study involved interviews with students, their parents, teachers, and the principal. Participants were selected by the school based on academic, social and leadership abilities. “The students we spoke to had a good understanding of who they were and what it means to be Maori and Te Arawa, but they also recognised they did not have to put this culture aside in order to be successful. The also had a sense of being responsible to their community, and responsible for their own learning, and were guided by parents who tended to have a strong work ethic,” Ms Webber says.

The research consortium involved in the study include Dr Angus Hikairo Macfarlane professor of Maori Research at the University of Canterbury, Hiria McRae, lecturer at Victoria University of Wellington, and Dr Candy Cookson Cox, an education consultant based in Rotorua.

4 thoughts on “Study to research tauira Maori success in Rotorua”