We have been bringing you information about the Ceremonial Waka that was launched at Aurere this Saturday (26 June).

At the launch the name of the waka was announced by Waka Historian Elder Tepene Mamaku, it will be known as Te hono ki Aotearoa, the link to Aotearoa (and in Dutch, Band Met Nieuw Zaylond).

Click below to view a report by Te Kaea on the launch: 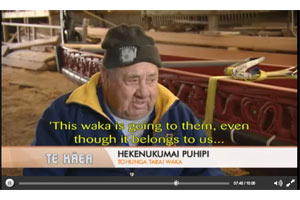