Surfersvillage Global Surf News, 23 October, 2010 : – – New Zealand’s best Maori surfers got to shine in excellent waves at Manu Bay, Raglan on the first day of the Auahi Kore Aotearoa Maori Titles today. The mega swell that was forecast throughout the week arrived on queue with solid 2.0m waves and light winds that picked up to a sea breeze throughout the day.

The event brought together surfers from throughout the country including many of the best that New Zealand has to offer such as home town hero Daniel Kereopa (Tainui). Kereopa placed second in both his heats to move through to the final of the Billabong Open Men’s Division.

I just took my time today bro, caught my two waves. Timmy O’Connor got all the good ones in the first heat and same with Leon (Santorik) in the semis so it was pretty tough to try and catch up to them.” Kereopa seemingly enjoyed the day catching up with friends and talking about the fun waves Whaingaroa had turned on for his visitors.

“Ahhh, I think the waves are really hosting all the surfers today” said Kereopa. “You don’t often get perfect 4-5ft Manu Bay for a whole weekend, so they are really lucky. It makes everything a lot easier. It is always going to be a great contest when the waves are good.”

Kereopa will face Santorik, Tim O’Connor and Matt Bennett in the final tomorrow in conditions that Kereopa expects to remain pumping. “I think when the waves drop off a bit, there will be a lot better surfing overall because the groms are struggling out there, it’s a bit big for them. Tomorrow will be a good day.” 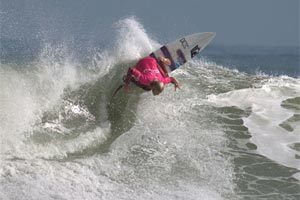 Other surfers to impress in the Men’s Division were an injured Tim O’Connor and Leon Santorik who won both of their heats today. Also progressing through to the final is Matt Bennett who scored a buzzer beating 7.5 point ride to knock Tyler Lawson out of the event.

While some focus was on the eight titles up for grabs, this unique event is also about having a lot of fun. For many, it is also about getting together as a family and given it a go. One of several father-son combos at this event is Jemarl Paerata and his son Elliot Paerata – Reid (Tuwharetoa). They both surfed heats today and as Elliot explained, they worked together coaching one another’s heats.

“We are just supporting each other while giving each other a bit of stick at the same time” said Elliot adding “He was my coach before my heat and now I am his coach for his heat coming up, so it is pretty funny reversing the roles.”

Unfortunately the young 14-year-old’s coaching skills weren’t as good as his Dads with Jemarl being bundled out of the Over 35 Men’s Division in the semifinals. However it was a different story for Jemarl’s coaching with Elliot letting his surfing speak volumes, posting the highest heat score of the day in his Under 18 Boys quarterfinal match up – 18.5 out of a possible 20.

“Yeah it was really fun, but I didn’t catch a wave until ten minutes to go” said Paerata – Reid of his shaky start. “After that slow start I just tried to get going with a little runner and it ended up good with heaps of big turns. Then I went out the back and waited for a big one and locked in an even better score – 9.5 I think.”

Paerata – Reid will contest the Quiksilver Under 18 Boys Division semifinals tomorrow along with his more favoured Rapu Under 16 Boys Division.

It will be a big day for Paerata – Reid with potentially five heats to surf. That workload is enough on its own let alone for a young kid that only got back in the country on Friday after competing in France for the past four weeks. “I am pretty tired right now. I have just been trying to keep going, eating sugar” commented Paerata – Reid on what lies ahead.

Despite the waves being on the bigger side of things for the groms, they all confronted their demons and charged what came their way. Mahorahora McLeod was impressive in the big surf as were Todd Doyle, Tyler Lawson and local surfer Corey Asplin.

In the senior divisions the older boys simply relished the chance to get perfect waves with only four guys out. It showed with some of the surfing produced. Massive score-lines were the order of the day with Wayne Cooper (18.0), Phil Willoughby (14.3) and Ronnie Mayor 13.3 all winning their day-one heats.

Initiated by the Waitara Bar Boardriders Club in 1992 the first event took place in 1993. The Maori Titles was instigated to acknowledge the sporting excellence and commitment that Maori Surfers have achieved at club, national and international level. The Maori Titles embraces kaitiakitanga and is focused toward strengthening whanaungatanga, manaakitanga and kotahitanga.

The Maori Titles is a spiritual awareness for some, a learning curve for others but most importantly it’s a time when family and friends can come together through their tribal links to experience kotahitanga (being as one).

The Auahi Kore Aotearoa Maori Surfing Titles are held annually and the event has become one of the premier events of the Surfing New Zealand events calendar. Labour Weekend is generally the time of the year that the titles are held.

Please see below for results from day one of the Auahi Kore Aotearoa Maori Titles held at Manu Bay, Raglan today (Saturday 23rd October). A full day of surfing will take place on Sunday (24th October) commencing at 8.00am sharp.