The New Zealand Rugby Union is offering a reward for information leading to the return of a 100-year-old Maori rugby jersey, stolen in June.

The rare jersey was stolen from Rotorua during Maori rugby centenary celebrations, at the Solid Energy Centre, on June 18.

NZRU chief executive Steve Tew urged people to come forward with information: “We really want to return the jersey to the Small family,” he said.

The union declined to say how much the reward was.

We are treating this complaint seriously, however, the key to recovering the jersey will be that vital piece of information that we do not yet have,” he said. 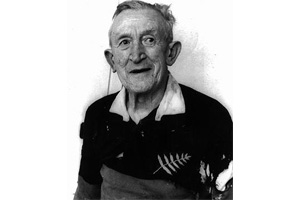 The jersey is black with a red centre band and a gold fern and is in a very fragile condition.

It has been in the Small family for 100 years and was worn by David Small in 1910 while on a tour of Australia.

The family had loaned the jersey to the New Zealand Maori team for the duration of their three-match centenary tour.

The jersey was discovered in 1961 by David Small’s son Vern when cleaning out his father’s garage in Wellington.