A desire to branch into another creative avenue resulted in artist Carissa Proffit dabbling in the art of Maori kite making.

The Waitati artist has always woven flax, after learning the craft from her mother, grandmother and aunts as a child.

She started carving Oamaru stone about 10 years ago, and has spent the past five months making kites.

“I just wanted to do something different. I wanted to branch out,” she said. 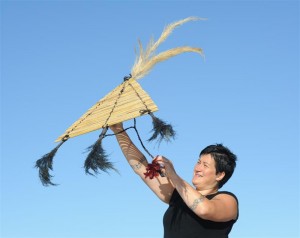 Her first kite, made from toetoe, flax, paua shell and feathers, is on display in Lower Stuart St, Dunedin, and took about two days to make.

To learn the background of Maori kite making, she borrowed a book from the library, but most of the technique came from experience.

Miss Proffit wanted to continue making the kites, with her own contemporary twist, and “get people’s attention with different things”.

Carissa Proffit is an artist living in Dunedin, New Zealand, who works in several media.

Carissa was born in 1974. Her father is of European ancestry; her mother is of Ngati Wairere descent (a Tainui hapu). Her childhood was spent in Heriot, West Otago. She and her father now live in Dunedin, where her father is a shearer based in Waitati.

Her media include flax weaving, driftwood, and Oamaru stone. Her work has been displayed in several South Island galleries.