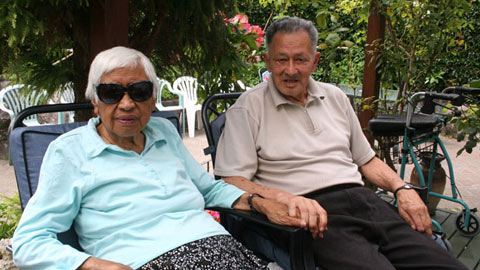 HONOURED COUPLE: Muriel and Ngapo Wehi have been recognised for their services to Maori.

(VANITA PRASAD – Western Leader) FROM the moment Muriel and Ngapo Wehi met at a bus stop in Gisborne it was love at first sight.

Mrs Wehi was going to leave her hometown for a job in Auckland when she saw Mr Wehi and decided to stay.

For 29 years the Henderson couple have guided thousands of Maori youth through the kapa haka group they founded, Te Waka Huia.

Mr and Mrs Wehi are the only six-time winners of the Aotearoa Traditional Maori Performing Arts Festival, which is now known as Te Matatini.

They got second place five times as well.

Now their joint services to Maori have earned both Mrs Wehi, 81, and Mr Wehi, 77, mentions in the New Year honours list.

Mr Wehi says he didn’t get into performing because he loved it, he did it for his wife.

“We made a deal. She would come along to watch me play sport if I joined in the kapa haka.”

Performing has taken them all over the world.

Mr Wehi says their first trip overseas was to New York and San Francisco in 1972 with Te Waka Huia.

Since then the group has shared Maori culture all around the world travelling throughout Europe, Asia, Africa and the Pacific.

They took part in the opening ceremonies at the 1988 Seoul Olympic Games and they performed at the close of the 1994 Commonwealth Games in Canada.

Their pan-tribal Te Waka Huia group had just got back from Shanghai when the couple received a letter informing them of their latest honours.

They are now preparing for their last Te Matatini competition before they retire and let their children take the reins.

Mr Wehi says while they were humbled by the New Year honours they are more thrilled by the legacy they are passing on. “We have three daughters and three sons who will carry on what we were taught.”

Their son Tapeta, one of those who will take over running the group, says he has big shoes to fill.

“Mum and dad are the pinnacle of what people can hope to achieve in kapa haka.”

He says while many urban Maori struggle to maintain their culture his parents have ensured that hasn’t been a problem for his family.

“Even though we live in Auckland our taha Maori is very important to us.”