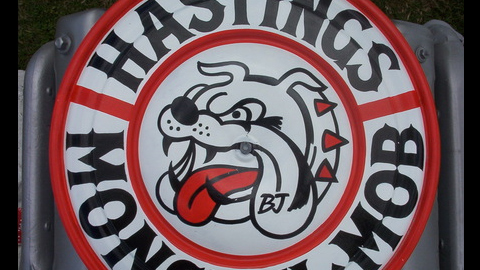 (Source | NZPA) A Mongrel Mob member has had his gang patch destroyed in a landmark court ruling.

Rawiri Mana Tehau, 30, appeared in Hastings District Court on Thursday and admitted a charge of obstruction relating to an incident on December 30, Hawke’s Bay Today reported.

The court was told police were in pursuit of an offender who ran into an address where patched members of the Mongrel Mob were drinking.

Tehau, and others, impeded an police officer, who eventually had to retreat given the group’s “aggressive nature”. Tehau then faced-off with a constable, with his arms in a fighting stance.

Judge Geoff Rea sentenced him to 125 hours’ community work, and at the police request, made an order for the destruction of his gang patch being worn at the time of the incident.

“This is a case-by-case thing,” he said. “In this incident the patch formed part of the offending…”

He was unsure if the test-case would deter others. “What I do know is that they don’t like losing their patches.”