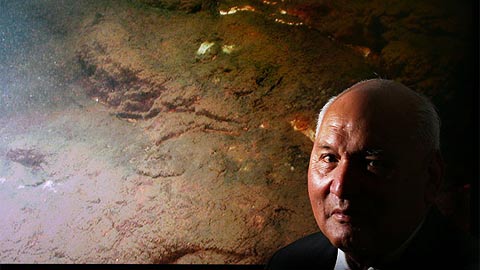 (Source | Dominion Post) Massive geothermal systems have been discovered along with remnants of the Pink and White Terraces, raising the prospect of power generation at Lake Rotomahana.

GNS Science announced yesterday the discovery of part of the pink terraces sitting on the lake floor and issued underwater images of its findings, which also revealed geothermal vents.

The terraces were destroyed during the eruption of Mt Tarawera in June 1886. But while mapping the lake floor during a 10-day project, scientists found what could be an up-to-80-metre section of the Pink Terraces, project leader Cornel de Ronde said.

“They’re back. Actually they never went away. They were always there, we just didn’t know it.”

Covered by brownish sediment, the one-to-two-metre-high terraces were scanned using sonar images, and it was possible the rest of the terraces were still concealed under thick sediment that the equipment could not penetrate.

The images also revealed numerous underwater vents, showing a geothermal system being driven by magma under the lake floor. “It’s a very, very big geothermal system. Ruapehu is half that; White Island is twice that.”

A large system existed in the area of the Pink Terraces, and to a lesser extent around where the white terraces once were.

However, Dr de Ronde said scientists had also discovered a new system on the southern part of the lake which had been created by the 1886 eruption.

The findings of the $400,000 study had been shown to iwi and Te Arawa Lakes Trust, which was vested with the lakebed in a settlement with the Crown.

Trust chairman Toby Curtis said it was too early to think of the lake as a “money-making machine” and the prospect of power generation had not yet been discussed.

“Before we start moving into any economic consideration we need to get the spiritual aspect of this properly addressed.”

He would not rule out the possibility of exploring the area’s geothermal power potential in future. “We haven’t discussed it. But I will be endeavouring to influence the decision.”

Kaumatua Anaru Rangiheuea, whose ancestors were buried during the eruption, said learning of the discovery of the terraces had been emotional.

“It brings back a few tears and a few feelings of my people that were all buried and killed in the aftermath of that eruption and weren’t able to get out. It’s sad for me.”

Certain areas of the lake, where it was known people had perished, were tapu and he would not support their excavation.

He believed the discovery of the Pink Terraces would again increase the area’s tourism potential, which iwi would assist in managing.

Dr de Ronde said the next step for researchers could entail seismic mapping of the lake floor, which would enable them to penetrate the surfaces they had not been able to during last month’s project.