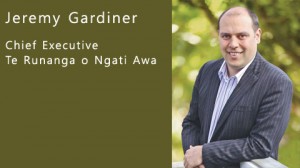 (NZ Herald by By Simon Collins) Te Runanga o Ngati Awa in Whakatane has become one of the first iwi to put its hand up publicly to buy state houses, which the Government wants to sell to iwi and other community groups so they can “leverage” the assets to build more social housing.

But iwi chief executive Jeremy Gardiner, stepson of Cabinet minister Hekia Parata, told a Community Housing Association conference in Henderson he would buy them only if he could pay a price based on their current rental income, not their book value.

“There are 400 state houses in Whakatane,” he said.

“If we go to the Government and say we want to buy them, they will say they are worth $80 million. No one is going to pay that because they don’t generate a return to justify that.

“They are worth $19 million based on the current rentals. That is a reasonable purchase price. That gives us some flexibility.”

Mr Gardiner said he knew of several other iwi in talks with Housing NZ about transferring some state houses to the non-profit “third sector”.

IHC has set up a subsidiary company, Accessible Properties, to manage its 870 existing houses for intellectually disabled people and bid to provide housing for the physically disabled and mentally ill. General manager Andrew Wilson said IHC would like to buy or build an extra 1000 houses over the next 10 years.

Housing Minister Phil Heatley said he wanted to achieve “a radical increase” in the social housing stock by helping third-sector providers acquire capital in the form of land, state houses, loans and grants, and providing ongoing subsidies through the health and social development budgets.

Mr Wilson said he could provide housing for the disabled with accommodation supplements already available to all low-income people through the Social Development Ministry, as long as he tgot help with capital costs.

But an advisory committee recommended last year that third-sector tenants should get the same income-related rent subsidies as existing state house tenants, who pay only 25 per cent of their incomes in rent.

Mr Heatley said he was looking at an “intermediate step” between this and the accommodation supplement.