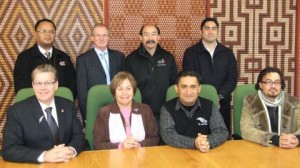 The two local trusts this week echoed calls made recently by the committee’s six iwi elected representatives, who tried to replace Mr Winters earlier this month.

The latest calls were made in submissions to the Rotorua District Council’s draft annual plan by representatives of the Ngati Uenukukopako Iwi Trust and the Ngati Te Roro o Te Rangi Hapu Trust.

In its submission, the Ngati Uenukukopako trust said it supported Te Arawa’s elected members in their call for a Te Arawa chairperson to replace the mayor who “… obviously has no comprehension or intention to understand impacts on Te Arawa”.

“The prejudiced behaviour by the mayor and council were evident during the airport expansion process and continue today,” the submission said.

At a meeting of the council’s Te Arawa Standing Committee on May 2, the six iwi elected representatives asked to review the chairmanship of the committee. But the committee did not have the mandate to remove the mayor from the chair.

“There is consensus among iwi members that it is timely to review the chairmanship to ensure the effectiveness and accountability of the committee to Te Arawa and Maori within the Rotorua district.”

“It is the view of iwi members that agenda items of importance to iwi members are not given adequate time to fully hear and discuss the views of its iwi members,” Mr Tahana said in his letter.

Controversy has plagued the committee in recent years, with two iwi representatives – Piki Thomas and the late Hawea Vercoe – resigning in 2009 saying non-Maori had too much influence and the committee had “no teeth”.

“I get my mandate from Tamatekapua, it is the traditional meeting house of Te Arawa and they’ve said a number of times they want the mayor to be chair of that committee.

If that mandate changes, then so be it.

“But, I think I’ve added real value and have assisted immensely in Treaty claims … from day one … and was involved with the settlement of the lake beds for Te Arawa as well,” he said.

The council’s kaupapa Maori director, Mauriora Kingi, said everybody had the right to their own point of view “but they should remember the mayor was put there by Te Arawa anyway, in 1993 when the elders met back then and said who better to chair the committee than the mayor”.

Councillor Charles Sturt said he believed the mayor could do a better job advocating for Te Arawa.

“Councillors like myself, Dave Donaldson and others go to these meetings and have seen that things aren’t going back to our other committees.”