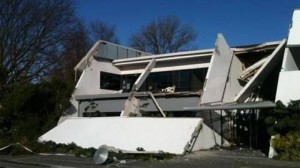 (Stuff) BREAKING NEWS: The shattered city of Christchurch has been rocked again by two damaging earthquakes this afternoon, measuring magnitude 6 and 5.5.

Send your news tips, photos and video to [email protected]

The magnitude 5.5 quake struck at 1pm, 10 kilometres east of Christchurch at Taylor’s Mistake beach, at a depth of 11 kilometres, and sent people scrambling for cover.

The magnitude 6 quake followed at 2.20pm and was centred 10 kilometres southeast of the city, at a depth of 9km.

Mayor Bob Parker told Radio NZ the second large quake was bigger than the 1pm one.

“Thank God we had evacuated the red zone.

“We are being enveloped with dust. It is very very scary.

“We need to get a picture of what is really happening and to make a call on where we need to send our essential services.”

More masonry has fallen from the ChristChurch Catheral in the afternoon’s second much larger aftershock, sending up large clouds of dust.

There are also reports that another building in Lichfield Street has fallen down.

Six people were taken to Christchurch Hospital with moderately serious injuries due to falling building material after the 1pm earthquake.

Police said there were no reports of injuries following the second aftershock.

Some roads and bridges were closed due to further damage or liquefaction.

St John Ambulance said several ambulances were operating in the city and some were on stand by.

A police spokesman said a building on the corner of Stanmore and Worcester streets had collapsed. Police had feared people were trapped, but a search established this was not the case.

The 5.5 magnitude quake followed a 4.3 tremor, 10km north of Darfield, half an hour earlier, and was followed by a magnitude 4.4 earthquake eight minutes later 10 kilometres southeast of the CBD.

The quake is the latest in a series of dozens of aftershocks to hit Canterbury following the devastating February 22 earthquake where 182 people died, and a damaging magnitude 7.1 earthquake with no fatalities last September.

Fire Service spokesman Dan Coward said there had been countless callouts to burst pipes, especially in the Sumner area where many locals were “freaked out”.

He said fire crews were investigating a number of suspected fires and the smell of smoke in various sites around the city.

Orion said power has been lost to about 10,000 homes in the eastern suburbs.