Sir Hirini Mead of Ngati Awa says the opening of the Mataatua meeting house in Whakatane was like a returned soldier finally coming home. 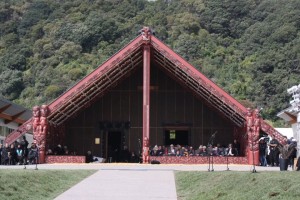 The house was taken by the Crown more than 130 years ago, after the tribe said it would be a place fit for Queen Victoria to stay in Whakatane, if she ever came to New Zealand.

The big wharenui, which is 24 metres long, was opened on Saturday at Te Manuka Tutahi Marae.

The house features beautiful carvings, including two sets of twin ancestors at the front which are on either side.

Mataatua was confiscated by the Crown over a century ago and shipped off shore to parts of Australia, Europe and even Dunedin.

Sir Hirini says it was a wonderful opening day and a wonderful return for the whare – like the return of a soldier’s who’s been away.

He was the meeting house is now free from being a museum exhibit.