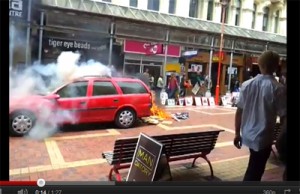 LATEST: A protester has been arrested after he lit an explosive and set a car on fire in Wellington’s Cuba Mall.

“There was a huge bang… the whole thing is burnt to a crisp,” said bystander Emma Beer.

“He’d obviously driven the car through the mall, everyone was running to see what happened.”

Dozens of people were gathered in the pedestrian only area of the Mall when the explosion occurred.

Tweeter Daniel McKenzie said tyres were exploding on the car as firefighters arrived at the scene.

Another video posted on YouTube shows two members of the public attempting to put out the flames with fire extinguishers before firefighters arrived.

Laura Jeffares was at the Mr Bun bakery when the man drove into the mall, before throwing what she thought was an incendiary device into the car.

“It seemed to be politically motivated… the man was yelling [as] he threw the incendiary device into the boot,” she said.

The message read “What is fractional reserve banking? Google it!”

Fire engines rushed to the pedestrian mall after receiving calls about the car around 1.30pm.

Police helped to cordon the area as passers-by crowded around to take photos.

The man who lit the fire, dressed in a fluro vest, was arrested and taken to Wellington police station, where officers said he will be charged after processing.