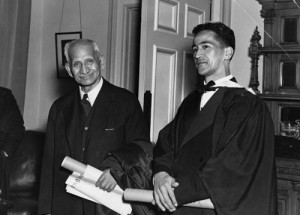 Sir Henare Ngata, a Ngati Porou elder and one of few remaining Maori Battalion veterans, passed away this morning, at the age of 93.

His father, whose likeness appears on the $50 note, believed one way for maori to achieve equality was to fight alongside pakeha in war.

Maori leaders from around the country are expected to farewell Sir Henare over the next few days.

In 2006 Dr Pita Sharples had this to say of Matua Herare:

Sir Henare Ngata holds the awe and respect for many Maori who see in him, the standards of excellence which characterised his father, the late Sir Apirana Ngata.

Sir Henare was the Chairperson of the Mangatu Incorporation. At that time shareholders were want to beat a trail to the office, hit the desk with their tokotoko, and demand their dividends. Sir Henare responded with fairness, with professionalism, and always with cultural finesse.

Indeed, his cultural expertise ensured his distinctive accountancy practice. As chair of the Incorporation, if he was asked to run a meeting in Gisborne, he would always call on the people from Rongowhakaata or Te Aitanga a Mahaki to whakatau. Best practice for Sir Henare meant never forgetting whose territory he was in, and how to recognise the mana whenua.

His wealth of knowledge of whakapapa was a constant strength to the practice, understanding and respecting the importance of maintaining respectful relationships.