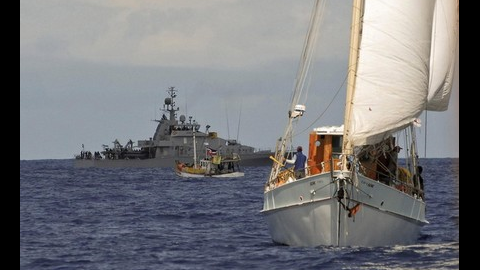 TangataWhenua.com has just heard from Mike Smith on Facebook that “Elvis Teddy the skipper of the Whanau a Apanui fishing boat who was arrested peacefully opposing deep water oil drilling on the East Coast will be appearing in Court on the 14th of February at the Tauranga court.”

Mr Smith also stressed the importance of community support saying “it really does make a difference to his case that the community is supporting Elvis, So come along on the 14th and stand in solidarity with thebrother! And remember that this action was based upon the premis that prevention is better than a cure and you good people will know this better than all of us! bring placards! noisemakers! and 15 friends each!!!!! SEE YOU THERE !”

Elvis Teddy, skipper of the Te Whanau a Apanui tribal fishing boat San Pietro, was arrested at sea and detained on a navy warship while fishing in Te Whanau a Apanui customary fishing grounds in the vicinity of the Orient Explorer, the deep sea oil survey ship ship currently conducting seismic testing in the Raukumara Basin on behalf of Brazilian oil company Petrobras. The arrest came the day after Maritime NZ withdrew the exclusion orders that police officers, assisted by the navy, issued to boats in the vicinity of the Orient Explorer the week before.

In the morning of the 23rd, Rikirangi Gage, CEO of Te Rununga o Te Whanau (Te Whanau a Apanui), radioed the Orient Explorer from the San Pietro as follows:

“This is the San Pietro calling the Orient Explorer. You are not welcome in our waters. Accordingly and as an expression of our mana in these waters and our deep concern for the adverse effects of deep sea drilling, we will be positioning the Te Whanau a Apanui vessel directly in your path, approximately one and a half nautical miles in front of you.

We will not be moving, we will be doing some fishing. We wish to reiterate that this is not a protest. We are defending tribal waters and our rights from reckless Government policies and the threat of deep sea drilling, which our hapu have not consented to and continue to oppose. We have a duty to uphold the mana of our hapu here in our territorial waters.” – the radio broadcast is available at http://www.facebook.com/video/video.php?v=216640131680960&oid=190815517606834

In response, two navy warships – HMNZS Taupo and HMNZS Hawea – sent inflatables with navy personnel and police officers to board the San Pietro and threatened to arrest all on board. Elvis Teddy was arrested, detained on one of the navy vessels, and taken to Tauranga while the others on board were left to crew the San Pietro.

He has been charged under Section 65A(1)(a) Maritime Transport Act and bailed to appear at Tauranga District Court at 8.30am on Friday 29 April 2011.

On 1 June, the government awarded Brazilian oil company Petrobras a five-year exploration permit for oil and gas in the Raukumara Basin.

The first two stages of exploration involve seismic surveying – firing compressed air from the surface to the seabed, and measuring the acoustic waves bouncing back to the sonar array trailing 10 kilometres behind the Orient Express. Seismic surveying can have an adverse impact on marine life, especially marine mammals. The current surveying is taking place during the season of whale migration along the East Coast.

The permit includes permission for Petrobras to drill an exploratory well. The massive oil and gas spill in the Gulf of Mexico last year, which took three months to cap and spilled millions of barrels of oil into the ocean, was from an exploratory well at a depth of 1500 metres. In the Raukumara Basin, the proposed depths for drilling an exploratory well range from 1500 to 3000 metres.

The Raukumara Basin sits on a major and active fault line, and a simple search of geonet – http://www.geonet.org.nz/ – shows there are frequent earthquakes in the area. It is therefore particularly risky to place any sub-sea installation, such as an oil well, there.

Te Whanau a Apanui were not consulted about the exploration permit, nor did they give their consent for the seismic survey.

What you can do

Contact your local MP as soon as possible and express your concern about the exploration permit, the lack of consultation with Te Whanau a Apanui, the arrest of the skipper of a vessel exercising customary fishing rights, and the protection of the interests of a foreign oil company at the expense of the rights of the local iwi.

Where you can get more information

2 thoughts on “Elvis Teddy to appear in court and needs our support whanau!”