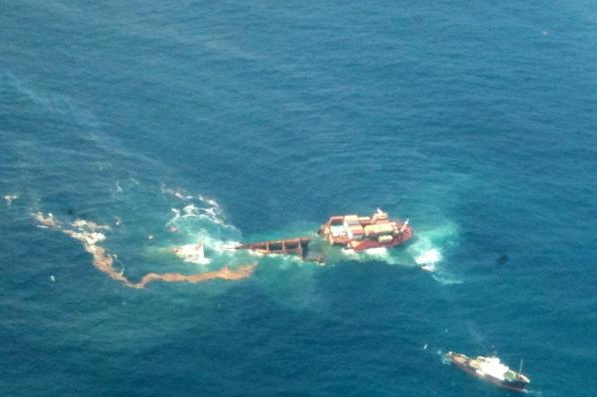 Debris and oil is floating from the mess of the sinking Rena as it slips off the Astrolabe reef.

Maritime New Zealand (MNZ) announced this morning that the stern of the cargo ship, which grounded off the Tauranga Coast more than three months ago, was going under.

It said the foremost part of the stern was still sticking up out of the water, with the rest – including the bridge – submerged. The bow section remained on the reef.

Salvors and MNZ staff had been monitoring the situation from the air since the ship’s status began to change at 8.30am.

Island Air pilot David Yeo, who flew over to take pictures from above the 1500ft air exclusion zone, said it was “pretty messy”.

“There’s just debris everywhere and stuff that looks like oil.

Yeo said it appeared tug boats were trying to direct where the stern of the ship sank.

The ship went down very quickly, he said.

“We got a tip that it was going down and flew straight out. By the time we got there it was already under the water.”

Yeo said while weather conditions were calm, the seas were a little rough. The bow of the ship remained on the reef, he said.

The wreck broke in two during rough weather over the weekend.

Earlier today, at least 20 more containers from the Rena were reported to have washed up on Matakana Island overnight.

Grant Dyson, spokesman for recovery company Braemar Howells, thought at least 32 containers had now washed ashore, about 25 of them on Matakana, with others on Waihi Beach.

The plan was to try to remove the containers from Waihi Beach as soon as possible, he said.

Workers would be dealing with them at the beach and on Matakana today.

Given current sea conditions, the fastest and safest method of removing the containers would be to remove their contents before taking them away by road. Access had been arranged to the south side of Waihi Beach, Dyson said.

The recovery company had sent a fast response boat and two tugs out at first light today to ensure shipping lanes and approaches to Tauranga Harbour were free of any containers that might pose a navigation hazard, he said.

In an effort to stop any more containers washing ashore, any close to the coast would also be towed.

Sonar sweeps were to be carried out between Waihi and Papamoa, looking for containers on the sea floor, while the clean up of the shoreline would continue.

Large amounts of debris had been collected at sea, and when conditions allowed, it was hoped to use nets to trawl for more.

A public meeting will be held this afternoon at Waihi Beach.

CONTAINERS COULD WASH UP FOR YEARS

Braemar Howells operations manager Claudine Sharp said trajectory projections showed containers could wash up on beaches as far as Mercury Bay over the next few years, and today’s meeting was intended to inform the public of the impact and future cleanup plans.

It was initially feared more than 300 shipping containers had been lost when the Rena broke up in rough seas, but Sharp yesterday said only 150 were thought to have been lost overboard.

Of those, 45 had been identified and tagged for recovery, she said.

The beach was reopened yesterday afternoon after being closed for the morning following reports of looting of containers washing ashore.