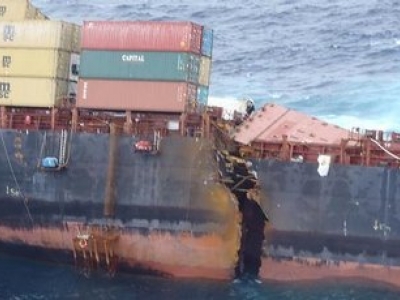 The Rena has split in two, with the pieces pushed 30 metres apart by the wild weather overnight.

Maritime New Zealand spokesman Ross Henderson said there had been a`significant`change in the ship’s condition, though the pieces were still on the reef.

The forward section of the ship was in its original position on the reef, while the stern had broken away and, while still on the reef, was moving siginificantly.

Henderson said the ship had been pounded by 6-metres swells and the bad weather was expected to continue for the next three to four days.

“There has been a significant discharge of containers and container debris from the ship. This may result in the 3nm [nautical mile] exclusion zone being extended.

“The National Response Team has been activated to respond to the potential release of oil from the ship and to treat any affected wildlife.”