Wellington will farewell a well-known vagrant today, but the growing shrine near his favourite spot will be gone in a week. 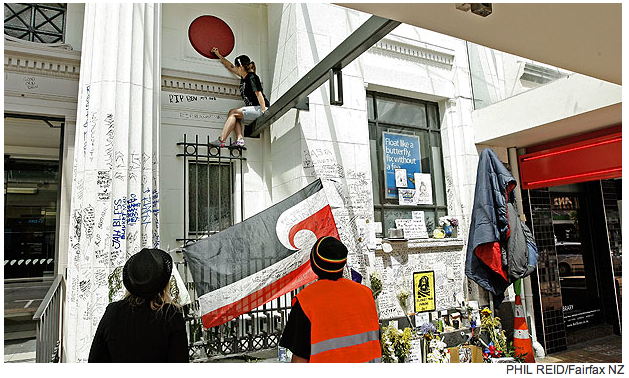 A public memorial service for Ben Hana, known as Blanket Man, who died in Wellington Hospital on Sunday, will begin at Waitangi Park at 10.15am.

Wellington City Council helped the family organise the service, which is expected to last 30 minutes and will be followed by burial at Makara Cemetery.

Council spokesman Grahame Armstrong said a hearse would drive into Waitangi Park, through Herd St, then in front of the Chaffers Marina apartments.

Samuel Jackson, mana whenua kaumatua, will speak at the service.

Tributes on a shrine erected for Blanket Man in Courtenay Place will be removed next week.

The shrine has continued to grow since the weekend, with more and more people writing messages of condolence on the ANZ building walls.

Those messages included one from Palmerston North woman Monique Bennett, who came to Wellington yesterday with her mother to pay their respects to Mr Hana.

Miss Bennett, 18, said she used to give him food and would talk to him when she walked past.

She climbed up the railings to write her message high on the wall.

It read “Rest in Peace Blanket Man, we will always miss you”, which she did not consider graffiti.

“It’s every one showing their love and appreciation … he deserves it.”

The council had spoken with the owner of the building where the shrine has been erected as well as family members and it had been agreed the shrine could remain until Tuesday, Mr Armstrong said.

He understood it would be removed after that. The council was organising for photos to be taken of the shrine and for any tributes and pictures to be given to the family.

The public service would be followed by burial at Makara Cemetery.

“We’ve had our family thing, this is all about the public tomorrow, for everybody else to say goodbye,” daughter Renee Temaari said.

A condolence book for Mr Hana will be placed at the Downtown Community Ministry in Lukes Lane.

The service is being paid for by Wellington businessman Gareth Morgan.

Miss Temaari said the funeral director was dealing with the money side of things.

There were plans to create a trust for people who wanted to donate, and the money would be given back to Wellington at a later date, she said.