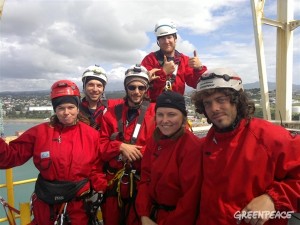 (Stuff.co.nz) Lucy Lawless and a group of Greenpeace protesters have been arrested after more than three days at the top of a Shell oil ship berthed at the Port of Taranaki.

Police had climbed the ship’s tower to reach them earlier this morning.

Lawless and a group of Greenpeace activists scaled the Noble Explorer’s 53-metre drilling derrick and unfurled banners in Port Taranaki at 7am on Friday.

The ship was scheduled to leave the port yesterday to drill three exploratory oil wells in the Chukchi Sea off the coast of Alaska.

“The primary concern for everybody is that no one is in danger,” Greenpeace climate campaigner Steve Abel, who is at the Taranaki port, said.

“While they want to stay … they will not resist.”

The protesters would likely descend the “enormous” tower and be arrested by police, Abel said.

“If there was an oil spill in the Arctic it would be impossible to clean up,” Abel said. “This is what this is about.”

Shell earlier rejected claims by protesters that it “bombarded” them with loud screams and sounds played over the speakers on the drill-ship Noble Explorer.

Lawless last night said from the ship that Shell was “going Guantanamo on us”.

“They’ve upped the ante. Shell are getting pretty pissed off, what one could expect.”

The protesters were being “bombarded” with the persistent booming sounds from loud speakers, including screams and feedback sounds, she said.

“It’s making us howl with laughter. It’s going to be a bumpy night.”

But a spokeswoman for Shell said the sounds were not being made in response to the protesters, but were just standard procedure.

Normal operations involve work throughout the day and night, she said.

“As part of routine work standard procedure requires the crane’s horn to be sounded when the crane moves over the vessel. There was no loud music or other extraneous noise.”

Shell believes the protesters disabled a light on top of the drill tower on Saturday night, and a spotlight is now having to be used instead.

Meanwhile, the spokeswoman said the company was continuing with its usual activities “to the extent that safety allows”.

The vessel would be turned around this morning so it could be refuelled, she said.

Those on board, including the protesters, would experience the ship’s movement, but it wouldn’t be anything substantial.

Lawless earlier said she expected to be arrested when she eventually left the ship.

Yesterday, Lawless said she and five fellow protesters had plenty of food and were not planning to end the protest.

“We’ve been informed that, technically, we are under arrest.”

Preparing for her third night up the tower last night, she said the group was eating frugally to preserve food and prolong the protest. “We’re self-rationing. It’s astounding how six peanuts can make a breakfast.”

On Saturday, Aucklander Ilai Amir left the ship for personal reasons. He was arrested for unlawfully boarding a ship.

To Lawless’ delight, he left his stash of Whittaker’s chocolate behind.

New Plymouth police were taking a low-key approach to the demonstration, she said.

“I think they realise it’s a peaceful protest.”

There had been ups and downs. “Sometimes in the middle of the night you think, ‘What have I done, will it do any good?’ But then the sun comes up and you feel better.”

The ship’s crew had continued to work on the ship below, and had been “gentlemanly”, she said.