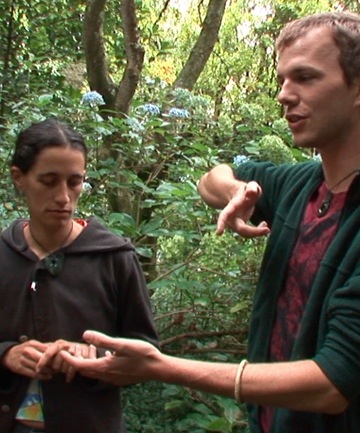 The first anybody in New Zealand heard of Swiss-born activist Urs Signer was when he took the stage as Elvis in Awatapu College’s 2001 production of Be Bop A Lula in Palmerston North.

Emily Bailey cropped up at about the same time at a protest in Wellington calling for peace in Palestine.

Six years later the couple, now together, were arrested in the 2007 Urewera “terror raids”, and eventually charged with being part of a criminal group and unlawful possession of firearms.

Not long after that they were living in Taranaki, in a small house at Parihaka, the village from which Maori peace prophet Te Whiti O Rongomai and Tohu Kakahi led a peaceful resistance to Maori land confiscations in the late 1800s.

It was to this isolated home they returned on Thursday after being thrust into the national spotlight for five weeks while their trial played out in Auckland.

The Crown alleged that, along with Tame Iti and Te Rangikaiwhiria Kemara, the pair wanted to create a revolutionary army willing to kidnap and murder to get self-governance for the Tuhoe people.

On appearance, at least, Signer and Bailey make unlikely terrorists. Signer, thin and with foppish hair, looks more like the renowned clarinet player he is than a violent terrorist. Bailey is also slight, but humble looking, and almost sounded embarrassed over the phone. Hardly what you might expect of someone with plans to battle the government.

The jury may have come to the same conclusion earlier this week when they failed to agree the Urewera Four were a criminal group. They did, however, find them guilty of firearms charges stemming from those infamous grainy images of the group “patrolling” through the Ureweras with rifles, using hand signals and at one stage molotov cocktails.

Even before the verdict was made, Parihaka kaumatua had criticised the charges against Bailey and Signer and publicly pledged their support.

“It would be really different if Emily and Urs were hotheads who didn’t really think deeply about things. But Emily and Urs aren’t like that,” Ruakere Hond, speaker of Parihaka’s Te Paepae House and a defence witness at the trial, said.

“They would be fairly aware that if they did participate in this sort of thing it would have an extremely negative impact on what activism is trying to achieve, which is awareness.”

Other kaumatua joined the chorus, including Rangikotuku Rukuwai, the great-grandson of Te Whiti himself.

Parihaka’s support of Signer and Bailey, and by extension the grievances of Tuhoe, a tribe that never signed the Treaty of Waitangi, is as old as the settlement itself.

Like the tribes of Taranaki, Tuhoe lost their land to confiscations. They share a common bond and therefore Mr Hond and other members of his community bring a different set of values to their judgment of the group known as the Urewera Four.

Under these values, the shadowy actions in the rambling Urewera Range is a form of activism against the degradation of their culture, their land.

And so, guns and molotov cocktails and all, the Urewera Four still fit into Parihaka’s frame of non-violent resistance.

“And it’s easy to say anyone with a rifle is probably planning to use it for violence. I don’t know if you have been to Tuhoe but rifles and guns are a natural part of things over there. I am not saying they have different rules but they have a different environment than Taranaki,” Mr Hond said.

Signer and Bailey themselves use the possibility of a retrial to avoid talking about exactly what they were doing in the bush with guns and molotov cocktails.

Just as they did during the five- week trial they prefer not to speak about themselves, even now that they’re home in Parihaka.

And just as in the past they maintain the charges against them don’t stack up.

Later, in a statement sent by Bailey from an email address “ditchthesystem”, she says the pair, in all their causes from Peace Action Wellington to the Save Happy Valley Campaign to their opposition to Wellington’s Te Aro Bypass and their work with Climate Justice Taranaki, never promoted violence.

“We do not need to defend nor explain what happened at wananga in Tuhoe country but murder, kidnapping and arson, etc, were never a desire of the wananga,” Bailey wrote.

Whether the Crown agrees will only be known in time. The possibility of of a retrial hangs over their current freedom as does their eventual return to Auckland for sentencing on Arms Act offences on May 24.

Their lawyer, Annette Sykes, is determined to see those convictions thrown out, as they were against the 13 others caught up in the raids in 2007 after the video evidence against them was found to have been illegally gathered. Ms Sykes said this was the same evidence used to convict the Urewera Four which the crown had only been able to submit because the four faced the more serious charge of belonging to a criminal group, a charge they were not convicted of.

“I wish them well. I hope there is no conviction. I hope they are treated the same way as the other group,” Ms Sykes said.

On Wednesday, Detective Inspector Bruce Good defended the operation which many have slated as heavy handed. He said police were obliged to carry out the operation because they received alarming information about illicit activity.

“If this activity had taken place anywhere else in the country – Rangitoto, Great Barrier, Stewart Island – our response would be the same. It’s about safeguarding the community.” Mr Good said he would not do anything differently if he had to lead the same operation again.