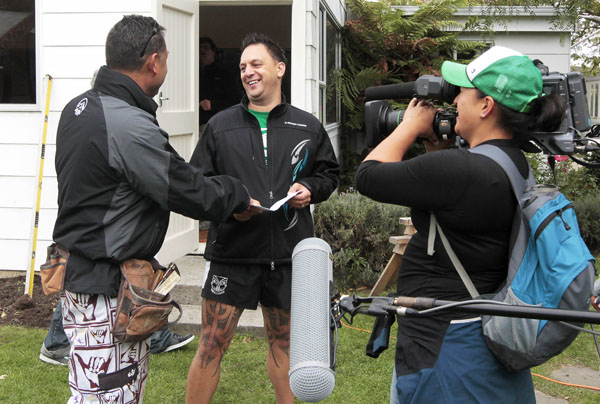 Omaka Marae in Blenheim morphed into a meeting place for mahi (work) yesterday morning as film and volunteer crews converged on day one of the marae’s transformation for Maori Television series Marae DIY.

About 80 volunteers from around Marlborough and further afield joined 11 film crew from production company Screentime to muck in for the four-day project that will see the marae grounds undergo landscaping work including a courtyard complete with outdoor fire and pergolas, a new deck, renovations for the whare kai (kitchen), and beautifying the urupa (cemetery).

Landscaper David Green, who had been working on the show since its inception nine years ago, was full of enthusiasm for the project and how it brought people together.

“It’s not about the project, it’s about whanau doing something for their tupuna,” he said. “They’re all here to have fun and that’s what makes it special. It’s the wairua, the feeling that you get from being here, and that’s why I’ve been doing it for nine years.”

Marae manager Kiley Nepia was delighted with the number of community members and organisations, including about 80 volunteers, who had given their time to the project on its first day.

“We’re just really, really thrilled to see to see so many people here today,” she said.

The taskforce worked through all the elements from 8am in the morning until whenever the scheduled work for that day was completed, which could be up to 11pm, she said.

It was one of the film crew’s biggest jobs this season.

Much of the material for the project was koha from Blenheim businesses, and the remainder had been donated by businesses around the country.

It was the third time an episode had been filmed in the South Island. Already, 50 marae across the country had appeared on the show.

The ninth Marae DIY series will air from June on Maori Television.