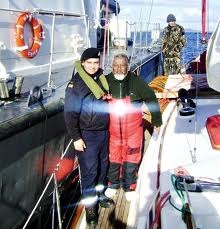 The Maori activist who stowed away on an unauthorised voyage to Antarctica has declared himself a “political refugee” in protest against the New Zealand Government.

Busby Noble made headlines earlier this year after it was revealed he was on board the 16m yacht Nilaya, which set sail from Auckland on an illegal expedition led by controversial Norwegian explorer Jarle Andhoey.

In a post on the expedition’s Facebook page, the Mana Party activist yesterday said he was disgusted New Zealand was being sold off.

“I Busby Noble hereby declare from this day that I am a political refugee overseas to protest against my countries (sic) current government,” he wrote.

“My country is not for sale. I refuse to acknowledge its tender. In respect of and to my ancestors, my people and my lands I hereby declare my disgust and abhorrence to the fact that the visitors to my country have chosen to sell my homeland from beneath me.”

Mr Noble said the Government had broken the Treaty of Waitangi and his aim was to secure New Zealand’s air, seas and lands for future generations of Maori.

“I will tear down walls of bureaucracy and injustice to get international attention to the plundering of my land.”

Mr Noble planted a Mana Party flag in the ice during the Nilaya’s unauthorised three-week expedition around Antarctica.

The crew then set sail for South America but were arrested by the Chilean navy late last month. They have since been released and were now reported to be en route to the Argentinian port of Ushuaia.

Andhoey has renamed the Nilaya the Berserk, after a support yacht that sank during another unauthorised Antarctic expedition he led last year. Three crew members died.

The New Zealand Defence Force has now revealed it did not incur any extra operating costs in the search and rescue (SAR) operation to assist the Berserk last year.

“The direct costs of the half day spent on the SAR for the Berserk would have been incurred regardless, under the funding provided to enable the Royal New Zealand Navy to meet required operational outputs,” he said.

The Wellington sustained damage in a storm that ripped through McMurdo Sound, lashing the ship with hurricane-force winds and swells of up to 8m.

But Lieutenant General Jones said none of the damage was incurred as a result of the search operation.

“The minor damage done to the ship, resulting in the need to replace various items and fittings, actually occurred during heavy weather conditions which were encountered before the SAR activity took place.”