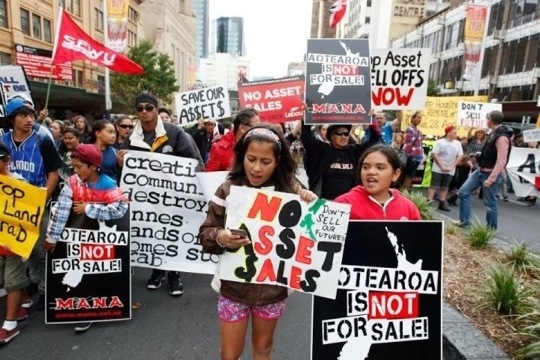 Following a public turnout of thousands who marched up Queen St in Auckland yesterday, the hikoi ‘Aotearoa is Not For Sale’ travels to protest in Hamilton. This morning at 10am people will gather outside the BP on Victoria Street, Hamilton for a march to protest the sale of our assets and resources. Both SOE sales and plans for massive sand mining on the West Coast will be highlighted.

Several large mining companies are looking to remove massive volumes of sand from 2,500 square kilometres of the west coast seabed, extending from Whanganui to the Kaipara Harbour.

Prospecting and exploration licenses extend from the low tide mark to the edge of the EEZ. Mining will likely occur in the inshore area.

After leaving Hamilton the hikoi will stop at Karapiro Dam on the Waikato River which was built in the 1940s. Karapiro Power Station is the last of the eight hydroelectric power stations on the Waikato River and currently owned by Mighty River Power, the first Government owned power company proposed for sale.

Every inch of rain that falls within the catchment of the mighty Waikato River, from the slopes of Ruapehu to the fertile Waikato plains, plays a part in powering our country’s homes, businesses and futures.

Eight hydroelectric dams owned by Mighty River Power are positioned along the 400km length of the Waikato River, and harness the power of water that falls from the sky for free, for the benefit of all New Zealanders.

Electricity is the oxygen of our economy. Morally and strategically power generation must remain in public hands and not the hands of a corporate few. Why would we sell such a strategic asset?

After staying at Mataikotare Marae in Rotorua tonight, the hikoi will assemble at the lakefront in Rotorua at 8.30am (Tutanekai St) Monday to march to the National Party office at 9am.

UPDATE: an earlier press release stated that the hikoi would be welcomed at Apumoana Marae, this is incorrect. The Kai and wananga will be held at Mataikotare Marae (past the airport at the Whakatane turnoff).

At 1.15pm tomorrow the hikoi will join the people of Taupo for a march through the town, to the shores of Lake Taupo, the headwaters of the mighty Waikato River.