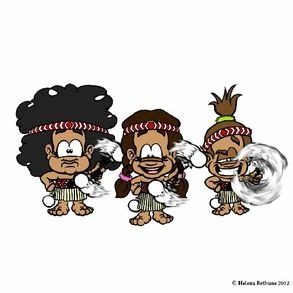 (Daily Post) Cartoon characters Hinepounamu, Little Hinemoa and Hinewehi may feature on a screen near you.

Three young Maori girls, one named after Te Arawa ancestress Hinemoa, are the lead characters of a proposed short film animation and a television series.

The cartoon comedy, titled The Rangimoekaus, is co-created by Te Arawa writer Helena Bethune who told The Daily Post the short film told the story of three hard case Maori girls living on a marae in modern day New Zealand.

Ms Bethune said she had named one of the lead characters Little Hinemoa in honour of the Te Arawa chieftainess Hinemoa.

“She is a leader, like her namesake Hinemoa and it’s my own special way of acknowledging my Te Arawa whakapapa,” she said.

The other two characters are Hinepounamu and Hinewehi and Ms Bethune acknowledged her other tribal affiliations – Whakatohea and Tuhoe from the Eastern Bay of Plenty.

Ms Bethune said the project was revolutionary in that it was very rare in animated cartoon comedies that the lead characters were all female.

“It’s like the Kiwi Maori Simpsons and based around the marae.”

Her inspiration was Maori comics such as Billy T James and the newer breed such as Taika Waititi and Rose Matawheo.

“It’s about us laughing at ourselves and that cool cuzzy bro humour.”

Ms Bethune said the cartoon was “the lighter side of Maoridom”.

“Maori are natural born entertainers and can be really hard case and I wanted to portray the humour you see on the marae.”

Ms Bethune has been working on the project since 2008 and has carried out extensive research. She has teamed up with Wellington-based artist Jon Coddington and Brotown script editor Dave Armstrong and animation director Maka Makatoa have endorsed their project.

“Both Dave Armstrong and Maka have provided plenty of motivation and have been our mentors. They’ve done it for aroha (love) but they’ll be a part of it once it takes off.”

The cartoon animation is based in Taranaki and production will commence later this year. The film will be released in 2013 and premier in Taranaki at the Tropfest Film Festival. Ms Bethune said she was looking to screen the film in Rotorua at the Magma Short Film Festival later that year.

Presently Ms Bethune said she was looking for funding to produce the movie and was offering businesses the opportunity to invest in the project.

One of the unique ideas was product placement and Ms Bethune said companies will be able to see their brand in the film.

“We need sponsors for the film because animation is expensive,” said Ms Bethune.

She said after the short film was produced they were hoping there would be a television series.

“We’ve told Maori TV and they like what we’re doing.”

She said her research had shown there was a demand from overseas audiences for indigenous cartoons so there would be possibilities to sell the series offshore.