Rotorua locals came out in strong support, in the opposition of the government’s proposed asset sales. The Aotearoa is not for sale hikoi, which arrived last night, gathered this morning after a karakia at the Lake Front.

The group which numbered between 300-400 was a great mix of Maori Party, Mana Movement and Green Party supporters, it also included support from Socialist Aotearoa, and locked out Union members form Tally’s AFFCO.

What was wonderful to see was as the march moved through the streets, people watching from the side joined in, there were groups of Pakeha girls, a team of Pacific Islanders, hair dressing students all happy to join the majestic chorus, that our land is not for sale to the highest bidder and that Aotearoa assets should not be sold when generations of New Zealanders contributed their blood sweet and tears to these lands.

One particularly poignant moment was when a group of primary school rangatahi, greeted the hikoi with a rousing haka (see below):

Speeches were made by different groups at City Focus before a haka was performed outside MP Todd Mclay’s National Office HQ. The hikoi then travelled to the skate park, where they regrouped and are now on their way to Taupo to hikoi through the streets, they will then move on to Turangi to sleep and wananga for the night. 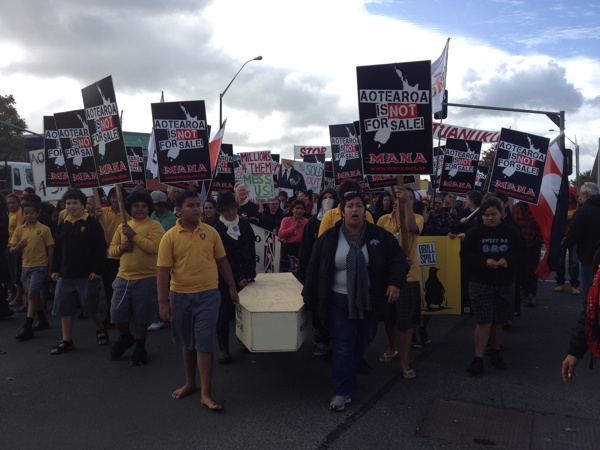