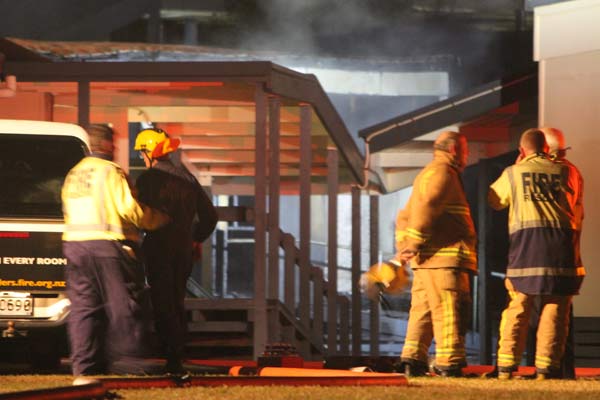 (By Kelly Makiha of the Daily Post, Photo Credit: TangataWhenua.com)

A suspicious fire at Rotorua Lake High School last night destroyed a classroom and came close to other buildings, including the school’s marae.

The fire is being treated as suspicious because the same classroom was set alight a week ago.

He said there was nothing they could do to save it so they concentrated on trying to keep the flames away from adjacent buildings, about 3m away.

It took eight firefighters about 15 minutes to get the blaze under control.

Mr Anastasi said it was too early to determine whether an accelerant was used. “It’s more than likely set deliberately but we will be investigating that thoroughly with the police.”

He said the Fire Service was called to the school about 10pm one night last week after the same classroom was set alight. Firefighters extinguished the blaze before much damage was done.

He said the first fire damaged cabling and as a result the building wasn’t alarmed last night.

Senior Sergeant Malcolm Collins of Rotorua police said the area was cordoned off last night and members of the CIB and a fire safety officer were to conduct a scene examination early this morning.

The school’s science block was the target of a suspicious fire in July 2010 which caused extensive damage to five classrooms.