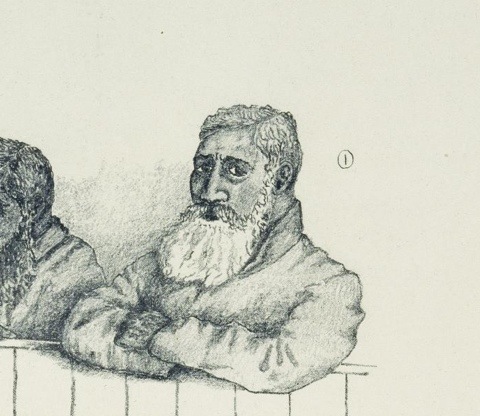 In 1868, Von Tempsky, an adventurer who had joined the British armed constabulary, was killed when he attacked Titokowaru’s position at Te Ngutu o te Manu pa in south Taranaki.

Many myths surround how Von Tempsky died and the whereabouts of his military sword which was reported as being kept in up to six places around the country. Most of the debate surrounded the nature of Titokowaru the man, with Mr Moeahu staunch in his defence of the celebrated military strategist.

“Titokowaru was a scholar, a Christian, a preacher, a warrior, a peacemaker, a prophet, a leader, and a martyr,” said Mr Moeahu, who shares a common ancestry with Titokowaru.

Mr Stowers, the author of 11 books including Von Tempsky and the Forest Rangers, questioned this view of Titokowaru.

“The record was that he played chess with one of his sub-chief’s wives,” said Mr Stowers in reference to the warrior’s alleged infidelities.

“It’s a rumour,” retorted Mr Moeahu. “You know what history is, Richard? It’s his story. Not someone else’s story.”

“People often come to view things through a colonial lens,” he said. But he did suggest to Mr Moeahu the pendulum on Titokowaru had swung too far so that he could “do no wrong”.

Members of the audience were encouraged to join the debate.

Trish Coles (Nga Ruahine) explained she was confronted by history every time she walked the streets of Normanby where she and her whanau lived.

“In Normanby, all but one street is named after the army. We have Chute St, Fitzroy, Von Tempsky . . . There are no Maori street names, bar one, in Normanby.

“Every day I am confronted by that army who did those things to Titokowaru,” she said.

“He set it at the right tone so that a reasonably balanced discussion of the moral acts of that time could take place,” she said.

“There are always extra facts which you can’t show on the surface, until you dig a bit deeper.”

Ms Emberton said the debate was a healthy way for both sides to express their views. “It’s important to encourage the community to be critical thinkers.”