The US Supreme Court has ordered the government to repay Native American tribes the costs of providing public services, in a ruling that could be worth millions of dollars.

Under federal laws which allow the tribes to manage their own affairs, the government must reimburse them for the costs of these facilities.

But between 1994-2001 the Congress failed to allocate enough money.

The tribes will now be paid in the same way as any private contractor. 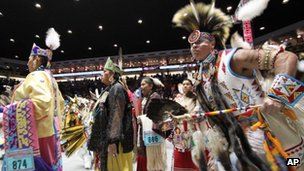 In the 5-4 ruling, the Supreme Court ruled on Monday that the Navajo Indians and several other tribes must be paid in full for the services they provided in 1994-2001, including education, environmental protection and security.

It said that it was not the fault of the tribes that Congress had imposed a ceiling on such payments because of the lack of funds.

“The government was obligated to pay the tribes’ contract support costs in full,” the court said in the ruling.

The federal payments reportedly covered between 77% and 92% of the costs, depriving the plaintiffs of hundreds of millions of dollars.

The verdict is a major victory for the tribes, the BBC’s Paul Adams in Washington reports.

But the decision also has implications for contractors in general, as the court said the government has to abide by its promises, our correspondent says.

If a service had been performed, the court said, then it was not good enough simply to say the money was not there.

7 thoughts on “US government ordered to reimburse Native Americans”