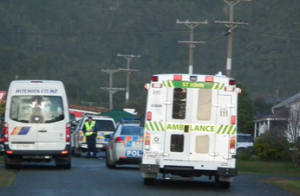 (NZ Herald, By Keira Stephenson of Westport News and APNZ)

Police have named a five-year-old West Coast boy who was killed by a school bus yesterday in front of his older brother.

Mahuri Bettjeman-Manawatu was dropped off in his hometown of Hector, 30 minutes north of Westport, about 3.10pm and was hit by the bus as he walked home.

A number of other children, including his brother, witnessed the accident.

Mahuri got off the bus at the intersection of Curtis and Greenfield streets.

As the Ritchies school bus turned left into Greenfield St, it hit Mahuri as he crossed the road.

One witness said the Mahuri ran out in front of the bus as it turned.

A resident, who wish did not wish to be identified, said the Ritchies school bus usually stopped around the corner from her house, but yesterday was different.

“We heard yelling and screaming from the kids and thought ‘gosh they’re noisy today’.

“Then we realised the bus was parked outside Greenfield St, which it doesn’t normally do, and then we heard the sirens,” she said.

Family members, including children, gathered inside the police cordon with the boy, and people came and went from their houses in the small community as police waited for a forensics expert to arrive.

A neighbour who came out after the accident said about eight or nine children usually got off the bus at that stop.

They often ran along beside it waving to their friends, he said.

A kaumatua has blessed the accident site, and a police investigation is under way.

Police have seized the bus and will interview the driver and other witnesses.

Ritchies’ director Andrew Ritchie confirmed one of the company’s buses was involved in the accident but refused to comment further until he had more information.

Megan Rich, principal of Granity School, where Mahuri attended, described it as every parent’s worst nightmare.

She said the school would be open today with a crisis response unit in attendance.

“Our biggest concern is the whanau and children and staff.”

Granity School has about 35 students across two classes.

The school’s most recent ERO report described it as a “caring and inclusive school culture” within a rural area where staff know students and their families well.

Other residents who knew the victim’s family said the close-knit community of about 300 was struggling to come to terms with the boy’s death.

“I think the family are going through enough at the moment”, said a woman who did not want to be named.

It is the third death of a young person in a vehicle-related crash on the West Coast in less than two weeks.

On August 12, Tayne Bowes, 9, drowned when his father’s four-wheel-drive plunged upside-down into goldmine pond near Hokitika.

The same day, 18-year-old Nadine Lawton of Totara Flat, died in a car crash on State Highway 7 at Ngahere, 23km north-east of Greymouth.