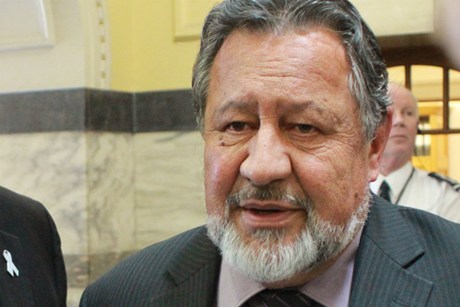 Adam Bennett – NZPA) Iwi and hapu leaders, the Maori Council and other key figures are developing a “national stand” on Maori rights and interests in water, which goes beyond the discussions the Iwi Leaders Group for freshwater is currently involved in with the Government, says Maori Party co-leader Pita Sharples.

In a hui called late last week by Dr Sharples, Maori leaders are meeting this afternoon at Wellington’s Brentwood Hotel to discuss how they will advance Maori rights and interests in water.

During a break, Dr Sharples told reporters the hui was going well with those attending keen to move forward on the issue.

The issue has assumed central importance as the Government moves ahead with its partial sale of state owned enterprises including Mighty River Power towards the end of the year.

The Waitangi Tribunal is currently considering what the extent and nature of Maori rights and interests in water are and whether they would be compromised by the sale of shares in Mighty River.

However, the Mighty River sale and any potential compensation deal for Maori that would clear the way for the sale had not been discussed at the hui by mid afternoon, Dr Sharples said.

It’s more about how we can work together as Maori people, tribes and organisations: is there a national stand as well as individual tribal stands?… there appears to be.”

“There’s beeen a determination that we’re all on the same page and looking forward to that discussion with the Government.”

Dr Sharples said the national stand would be above and beyond the work that the Iwi Leaders Group for freshwater issues was currently conducting through its involvement in the Land and Water Forum and direct negotiation with the Government.

The Iwi Leaders Group was “a very vital part” of represenations to the Government, “but overriding that are principles that apply to all Maori”.

The discussions this afternoon were about “seeing how to combine those interests”.

“I think there is as chance of having a real co-ordinated approach to the Government, I hope that does come off and it will include the iwi leaders’ support for that as well.”

Dr Sharples said the hui had also discussed previous court action by Maori to establish their rights in other areas, “perhaps where we have not won or taken up the case properly”.

The hui was “setting down a blueprint by which we may put a case to Government”.

The hui is scheduled to finish up at about 5pm and from there Dr Sharples and his co-leader Tariana Turia are to meet with Prime Minister John Key early this evening.

He said the main topic of that discussion would be Mr Key’s comments last month “about disregarding the tribunal” and that he would not wait for the tribunal’s final report before selling shares in Mighty River.

“I thought that was derogatory…what we’re really discussing is an affront to a tribunal. The mana of the tribunal needs to be respected.”

He hoped this afternoon’s meeting would result in “a more comprehensive stronger lobby” which the Government would have to listen to.