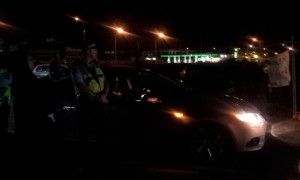 Mana MP Hone Harawira was arrested, October 12, 2012 while attending a mass protest at Glen Innes Housing Estate. Contractors attempting to remove a Housing NZ house from the estate were thwarted for several hours by protesters sitting on top of the roof. Police attempting to remove the protesters identified MP Harawira when he arrived at the protest in his car. Police removed the Mana Party Leader from the vehicle and arrested him for obstruction.

The comment heard on the video, “this is going to look good on the news” was clearly directed at Police, who have been criticized for singling out prominent persons and suspected “leaders” of the leaderless protest. Mr Harawira is extremely popular in the Glen Innes area, and his arrest was met with anger by protesters.

The Mana MP’s conduct throughout was exemplary. According to sources close to the veteran protester, Mr. Harawira has managed to avoid arrests from over 20 years.