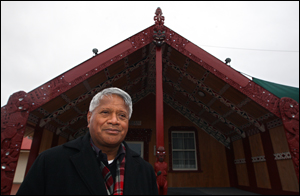 Rawiri Te Whare who died today after a long battle with diabetes.

Mr Te Whare was instrumental in helping bring to a successful conclusion an $85million Treaty of Waitangi deal plus an apology from the Crown for Te Arawa in 2009. He died at Waikato Hospital this afternoon with whanau (family) at his bedside.

Awarded the Companion of New Zealand Order of Merit for his work to Maori, Mr Te Whare was the chief negotiator for Te Pumautanga o Te Arawa trust, which represented an affiliate of 11 iwi in their Waitangi Treaty settlement negotiations with the Crown.

He was also recognised by his iwi Ngati Tahu/Ngati Whaoa in 2010, with the chieftainship for his work during the settlement process.

He has joined a number of great leaders Te Arawa has lost over the last few years. Rawiri was a great man and is a huge loss for us.

Mr Kennedy said it was not only his work during the Treaty negotiations but his work with teaching te reo Maori.

“He was a key component at Waiariki with the teaching of our language. He always knew it was an important factor in keeping our culture alive. He will be missed.”

Mr Kennedy said the family were bringing Mr Te Whare back from Waikato Hospital to lay in rest at his home tomorrow.