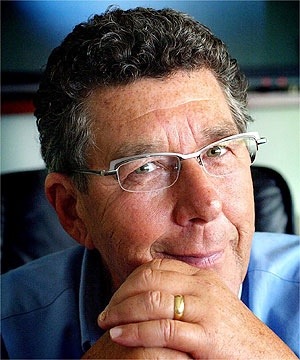 (NZHerald) Sir Paul Holmes, the controversial broadcaster with the cheeky grin and quick wit, has died at home, surrounded by family.

Holmes’ family issued a statement at 9.30am.

“Sir Paul Holmes passed away peacefully early this morning surrounded by his family at home in Hawkes Bay, as he wished to be.

“Sir Paul had been in poor health since having heart surgery earlier in the year. In recent months he had also been suffering from a resurgence of prostate cancer.

“More than just a broadcaster, Paul was a loving husband and father, as well as a generous friend. He loved people and people loved him.

“Lady Holmes, Millie, Rueben and Ken Holmes would like to thank the public for their incredible support. ”

The family said information on how the public could pay tribute to Sir Paul would be announced in due course.

The 62-year-old was admitted to hospital a week after his investiture last month was hastily brought forward.

Just a few months ago, Sir Paul’s old foe, prostate cancer, forced him to pull the curtain on a 40 year career.

Sir Paul rose through the ranks of media in New Zealand, and not long into fronting his self-named TVNZ current affairs show became as much a celebrity as those he interviewed.

As his popularity grew, Sir Paul’s personal highs and lows also made headlines. Every twist and turn in his life became public property including a battle with prostate cancer and a near-death experience in a helicopter accident.

More recently it was again his health which made the headlines; his career was put on hold when his cancer returned early last year and he underwent open-heart surgery in June.

He briefly returned to the country’s screens and airwaves, but in December he announced he was retiring from broadcasting because of poor health.

An unexpected phone call from Prime Minister John Key on Christmas Day ended Sir Paul’s “annus horribilis” year with an “unexpected wonderful” gift in the form of a knighthood.

Sir Paul was born on April 29, 1950 to Christina and Henry. He grew up in Haumoana, Hawkes Bay with his brother Ken (born 1952), and went to school in Hastings.

In 1972 he completed a BA at Victoria University and joined the New Zealand Broadcasting Corporation as an announcer in Christchurch.

A bright future was almost cut short when Sir Paul was involved in a near-fatal car crash in 1973. He suffered a neck fracture, brain haemorrhage and lost vision in his right eye. He recovered after several weeks in hospital and re-launched his radio career.

In 1989 he again made headlines when the helicopter he was travelling in crashed into the ocean off the North Island’s east coast killing a man. Sir Paul survived and swam to shore.

Sir Paul was New Zealand’s dominant broadcaster from the late 1980s into the new millennium, hosting a radio show on Newstalk ZB in the mornings and prime-time television current affairs in the evenings.

He is also an author, and in 2011 published Daughters of Erebus, a re-assessment of the cause of the 1979 disaster in which an Air New Zealand DC-10 crashed into Mt Erebus in Antarctica, killing all 257 people on board.

In 2009 Sir Paul began hosting TVNZ’s political show Q+A, and had been writing a column for the New Zealand Herald.

In recent years he had been living with his current wife, Deborah, at a Hawkes Bay farm with gardens and thousands of olive trees.

His investiture as a Knight Companion of the New Zealand Order of Merit was held there on January 16 this year. Family had requested the ceremony be fast-tracked because of his ill health.