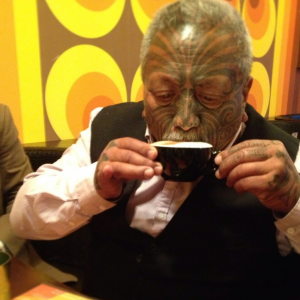 (NZ Herald) Maori activist Tame Iti has been released on parole early today after serving a third of his prison sentence.

An early rise this morning to meet with my whanau in kihikihi. It feels good to be out… Now where is my cappuccino,” Iti wrote on Twitter just after 7am, accompanied with this photo.

Iti and co-offender Te Rangikaiwhiria Kemara served nine months of a two and a half year prison sentence after being found guilty during a trial last year of six firearms charges and not guilty of four.

Iti was released from prison about 6am, One News reported.

The Parole Board decision said Iti had shown leadership qualities in prison, and was described as a role model prisoner.

“His family have all noticed a maturing of Mr Iti, and that he has got on with the sentence as best as he could and has been as helpful as he could be to other inmates.

Mr Iti, himself, states that he has taken an active role in prison life and that he has grown as a person as a result.”

The board did not see that he posed an undue risk to the community.

The board said Kemara had also been an “exemplary” prisoner”.

He was due to be released next week.

Urs Signer and Emily Bailey were also found guilty of firearms charges and were sentenced to nine months’ home detention, at their home in Parihaka, Taranaki.