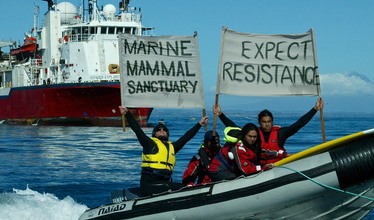 (Audrey Young, NZ Herald) Parliament has passed a controversial law outlawing protests that interfere with or damage oil exploration vessels, leaving protesters liable for a fine of up to $100,000 for groups or $50,000 for an individual.

The new law also makes it an offence for people to get closer than 500 metres to a ship that is declared to have a “non-interference zone”. Entering the zone could result in a $10,000 fine.

The Crown Minerals (Permitting and Crown Land) Bill governs the permitting systems for mining and mineral exploration, and had been relatively non-controversial until Energy Minister Simon Bridges introduced a late amendment establishing the new offences after it had been considered by the commerce committee.

Opponents tonight described it as shifting the playing field further towards industry and away from the environment.

“This amendment fills a gap in the existing legal framework and provides clear expectations and penalties for the new offences,” he said.

“Assurance that lawful activities can be carried out without interference is a necessary part of establishing a predictable investment.”

Labour MP Ruth Dyson said she was “outraged at the breach of process”.

She also criticised the fact that the bill would allow any decision about permits to mine land under the responsibility of the Minister of Conservation to be made by the Energy Minister as well as the Conservation Minister.

Her Labour colleague Moana Mackey said to see Attorney General Chris Finlayson last week “defend the indefensible” was an embarrassment, and that there was no way the new law would have passed a Bill of Rights Act vet if it had been part of the regular bill because it singled out protest actions against oil and gas exploration.

“It’s a PR stunt that sends a message to the oil companies that this Government is prepared to do anything to get them here – it is prepared to sacrifice any democratic right or environmental standard in order to see this activity go ahead.”

It was “a tilting of the playing field constantly in favour of industry over the environment.”

The bill sets up a two-tiered system of managing permits. Tier 1, which will apply to higher return petroleum and mineral activities, will be managed more closely than tier 2 permits which will apply to small businesses and hobby mineral operations.