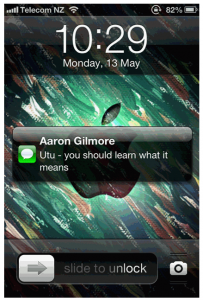 (stuff.co.nz, by Joelle Dally & Andrea Vance) Disgraced MP Aaron Gilmore has been threatening ‘utu’ on those who effected his downfall ahead of his valedictory speech in Parliament tomorrow.

After resigning from Parliament last night, Gilmore is understood to have sent at least four people text messages advising them to learn the meaning of ”utu”.

Utu has a number of translations, among them the concept of reciprocity or revenge.

Those who have received the messages include Whale Oil blogger Cameron Slater and Christchurch lawyer Andrew Riches.

Slater has placed a screenshot of his text message on his blog along with a post about Gilmore.

Riches confirmed he had received a text message from Gilmore but declined to comment further.

Gilmore, the National party’s lowest-ranked list MP, was privately said to be seething last night, and party members are anxious about what he might say in a valedictory speech planned for tomorrow.

Gilmore’s father Garry Gilmore said last night that his son did not want to comment before addressing Parliament, but when he did, it was going to be ”a big story”.

Gilmore issued a statement yesterday evening saying he was quitting with “a heavy heart”.

National wanted him to go after his boozy antics in Hanmer Springs last month and allegations that he misled Prime Minister John Key’s office.

An aggressive trail of emails also emerged last week, which had led to his departure from the Ministry of Business, Innovation and Employment (MBie) last year.

Gilmore was due to talk to party president Peter Goodfellow by phone yesterday afternoon, and Goodfellow wanted a meeting in Wellington today.

Gilmore has not picked up his cellphone since news of the Hanmer outburst broke, and did not return a call or messages fromĀFairfax MediaĀthis morning regarding the threatening texts.