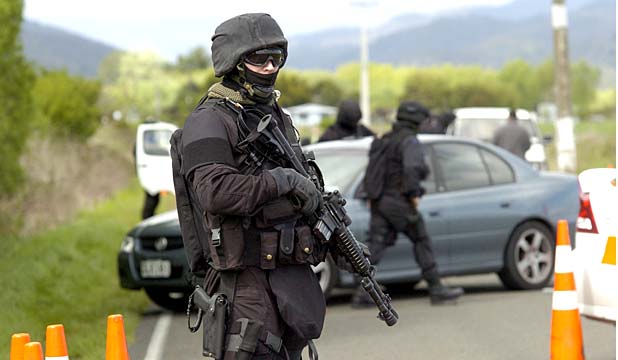 (Radio NZ) A landmark report has heavily criticised the police for illegally searching and detaining people, and for setting up unlawful roadblocks, during the Urewera raids in October 2007.

The Independent Police Conduct Authority on Wednesday released the findings of its investigation of the case and made a series of recommendations for change.

The authority has found that, as a whole, the police operation was reasonable and necessary, but it also faults the police for several shortcomings.

Authority chairman Judge Sir David Carruthers says it scrutinised police actions at 11 properties that were searched, after people from three different addresses complained that they and others had been personally searched.

Police had no justification for personally searching occupants, and these searches were unlawful.

“The detention of the occupants at five properties examined by the authority was also unlawful, unjustified and unreasonable.”

Judge Carruthers finds fault with the police for leading people to believe they were being detained, and has also criticised what he calls deficient planning for roadblocks set up in Ruatoki and Taneatua.

He says photographs were taken of 66 drivers, 15 passengers and some children, which left people feeling degraded and intimidated.

It also added to people’s fear and anxiety. Police did not have reasonable grounds to search vehicles at the Ruatoki roadblock. Police actions in this regard were contrary to law.”

The authority has made seven recommendations, including ordering the police to repair their relationship with Tuhoe and to change Armed Offenders Squad policy.

Police Commissioner Peter Marshall says he accepts the report’s criticisms and acknowledges officers acted illegally in some parts of the raid. Mr Marshall says the operation was a large one, with 300 officers deployed to search and raid properties around the country.

While there had been a two-year investigation leading up to the raids, he says, officers were only briefed that morning.

Mr Marshall also says the officers in charge of the road block at Ruatoki misinterpreted the legislation they were working under,but were not acting with any malice.

“There was an abundance of caution being exercised by them and they simply got in wrong in terms of the interpretation of the legislation on the roadblocks, and we accept that.”

He apologises to anyone whonot involved in the investigation who was not a suspect and who was inconvenienced, frightened or distressed.