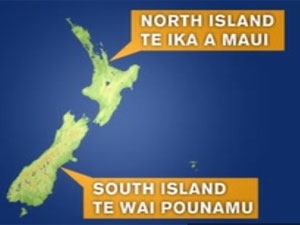 (Stuff.co.nz) The official names of New Zealand’s two main land masses will be North Island or Te Ika-a-Maui, and the South Island or Te Waipounamu, under a recommendation from the New Zealand Geographic Board.

The board today said it would recommend to Land Information Minister Maurice Williamson that people be given a choice about whether to use the English or the Maori names for the country’s two main islands.

The board met yesterday to consider 2608 submissions from 1329 submitters on the naming of the islands, which had been officially nameless.

Board chairmanDon Grant said the board was encouraged that the overwhelming majority of public submitters wanted the choice to use the English or Maori names.

“That said, the numbers were not the main consideration,” Dr Grant said.

“The board is guided more by the reasons provided by submitters for their support or objection.

“The board carefully considered the supporting and opposing submissions and this has informed its recommendations to the minister.”

Once the minister had made his final determination, it will be gazetted as official and notified publicly.